BELIZE CITY, Tue. Apr. 11, 2017–Who’s your daddy? If the playoffs ended today, the San Pedro Tiger Sharks would play the Dangriga Dream Ballers in the semi-finals. There are very few teams in the 2017 version of the NEBL that consistently gives the Tiger Sharks trouble; the Dangriga Dream Ballers is one of those teams. Since last year, the Dream Ballers have won three of four played between the two clubs, sweeping this year’s two-game series in impressive fashion; but more importantly, have established that they are more than capable of winning on the road, having won the last two meetings played on the island of San Pedro.

This was the case on Saturday night, as the Ballers entered 4th quarter play staring up at a seemingly insurmountable 67-56 deficit, in one of the league’s toughest arenas to play, particularly when trailing. But the Dream Ballers, for some unknown reason, seems comfortable playing in front of the San Pedro faithful. Rather than playing from a position of weakness, they instead seemed to embrace that challenge and play from a position of strength. That strength on Saturday was defensive intensification, which when employed made the Tiger Sharks seem disorganized and erratic, committing 8 fourth-quarter turnovers, while being held to just 16% shooting on 2 of 12 from the field, and a substandard 1 of 8 from the charity strips. Four Dangriga players had at least one steal in the fourth, with Dillmore Conorquie leading the way with three, while Kevon Laurie and Akeem Trapp had two each. Tahj Wells chipped in on the front court with two blocks, and as a team the Ballers crashed the offensive glass, out-hustling their opponents by grabbing six of their game’s thirteen offensive rebounds in that decisive fourth quarter. The results, Dream Ballers outscoring the Tiger Sharks 23-6 in the fourth, on their way to the 79-73 win. 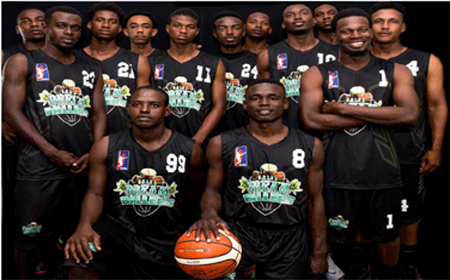 Ballers’ Dillmore Conorquie had a game high 24 points on 8 of 20 shooting from the field, to go along with 5 rebounds and 9 steals. He had adequate support from his big-man, Tahj Wells, who secured another double-double with 14 pts 14 rebs and 2 blk shots in 35 minutes of play. Quinton Bowen, who had been mired in a slump, bounced back at a most opportune time, totaling 14 pts 2 rebs 2 assts.

On the other side of the coin, George Jones was the high-man for the Sharks, totaling 22 pts 8 rebs 3 assts, but turned the ball over 6 times. Douglas Valley chipped in with 12 pts, and Jamal Kelly had 11 pts.

As a team, the Sharks converted a higher percentage of their shots (41%) compared to the Ballers (40%), and surprisingly out-rebounded them, 53-44. They also dominated in the paint, 44-34, and had respectable contributions off the bench. Unfortunately, though, they lost the second-chance opportunities battle (12-4), as well as the points off turnover, 31-22, which ultimately decided the outcome of the game.

More significant for the Tiger Sharks, though, as they set their eyes on post-season play, and the looming possibility of a first-round match-up against these same Ballers, is the fact that, in the two games played against the Dream ballers this year, both losses, disturbingly, they have been outscored 37-15 in the fourth quarter.

With the 2017 regular season quickly winding down, the playoff picture is now taking shape; and with their 73-65 win over the Orange Walk Running Rebels on Friday night at home, the Cayo Western Ballaz distinguished itself as a contender, while for all intents and purpose distinguished the Rebels as a pretender. The win, their sixth of the season, against five losses, places them for the time being at number 3 in the standings, with just one more game remaining on their schedule.

The Ballaz outscored the Rebels 42 to 29 in the third and fourth quarters, after trailing 36-31 at the conclusion of first-half play. Daniel Nolberto 16 points 6 rebounds led a quartet of Western Ballaz players scoring in double figures, which included Darwin “Puppy” Leslie with 11 pts 3 rebs, Elsworth Itza 10 pts 11 rebs, and Gene Myvett 10 pts 7 rebs 4 assts.

Meanwhile, the Rebels, who have shown over the duration of the season their deficiency in closing out games, once again held to form. Fatigue and tired legs spelled disaster for the Rebels, as they committed 13 of their game’s 23 turnovers in those two quarters, while making just 11 of 34 field goal attempts, for 32%. Invariably, their opponents converted those 23 turnovers into 24 points. Leon Jacobs, who led the Rebels with 17 pts 4 rebs, regrettably had 4 turnovers. The story was the same for Roger Reneau, 13 pts 7 rebs 6 assts, but 6 turnovers; Randy Usher 12 pts 3 rebs 3 assts, 4 turnovers; and James Ewing 12 pts 17 rebs and 5 turnovers. The game was essentially close for three quarters. The Rebels shot 38% from the field on 27 of 70 shooting, compared to the Ballaz’ 33%; rebounds were pretty even, with the Ballaz holding the slight edge, 52 to 48, while the contribution from both benches was adequate. However, the two key areas where the Rebels lost control of the game were in second chance opportunities allowed (19-6), and in points made off turnovers (24-7), both in favor of the triumphant Western Ballaz. 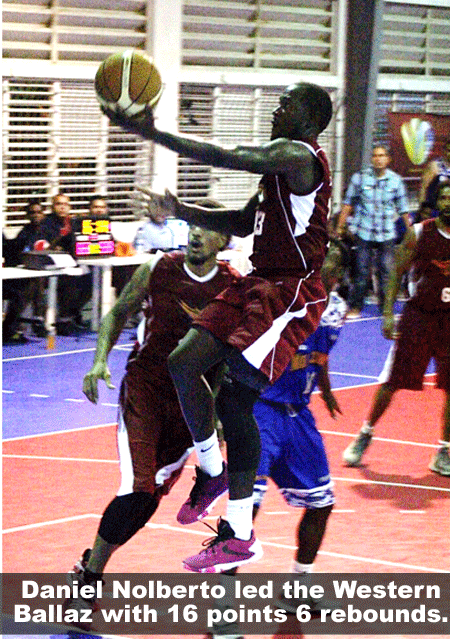 The defending champs, Smart Hurricanes exploded for 55 points in second-half action against Belize City No Limit on Friday night at the St. Catherine’s Academy Auditorium, securing the much needed 88-71 win. With the win, they mathematically kept their playoff hopes alive, with three games more remaining to play on their schedule.

Meanwhile, for No Limit it was Kyle Young leading the way with 22 pts 10 rebs. His teammates, Russell Staine chipped in with 14 pts 2 rebs, while Kenny Brown hit for 12 pts 4 rebs 2 assts.

The Hurricanes had their best shooting night of the season, converting 31 of 65 attempts for 47% shooting. They were also surprisingly good at the charity strips, making 24 of 36 attempts for 66%. On the other end, Belize City No Limit shot poorly from the field at 38%, and were outrebounded 39 to 31. With the loss, No Limit now falls to (2-8) on the season, with two more games remaining on their schedule. 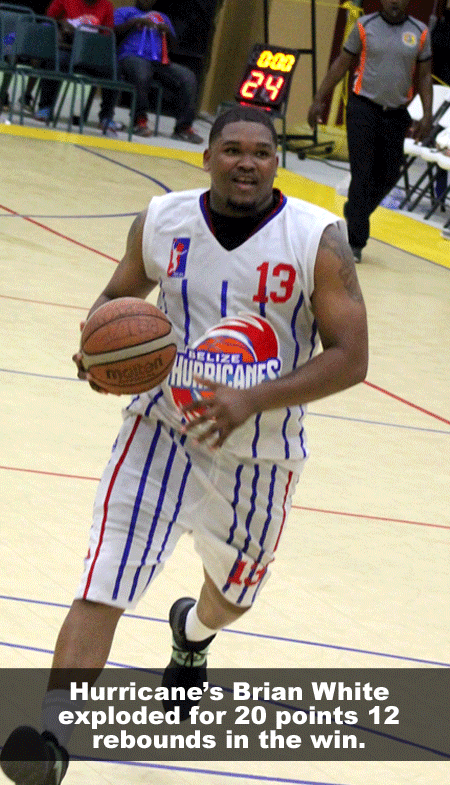