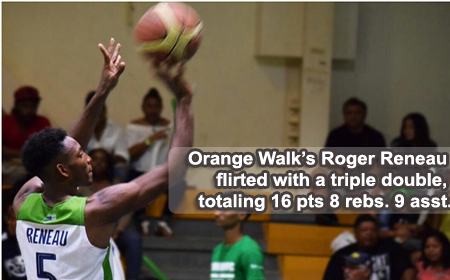 When Orange Walk Running Rebels point guard Randy Usher heaved up an ill-advised three-point attempt with 7 seconds remaining in regulation in a 61-61 tie against the visiting Belmopan Bandits, it was an obvious sign that the Rebels’ 6-game losing streak against the visitors would be extended to 7. Even more distressing, though, for the hometown faithful, was the fact that they had enjoyed a very comfortable 59-52 lead with just about 7 minutes remaining in the game.

And so, with the world now on their shoulders, the Rebels entered overtime play. They quickly jumped out to a 65-61 lead behind a tip-in basket from Shemar White and a lay-up by Gabriel Taylor. Richard Smith III, however, responded with a basket of his own, on the assist by Edgar Mitchell. Randy Usher then hit a big three-pointer to give his team the 68-65 lead. Not to be outdone, Edgar Mitchell, arguably the Player of the Game, with 20 seconds remaining in the game, came up big, hitting the big trey, on the assist from teammate Richard Smith III, which gave his team the slim 76-75 lead. With possession of the ball and 20 seconds remaining in OT, the Rebels once again found themselves with the unique opportunity to win the game for their home fans. But again the offense was slow out of the box, squandering valuable seconds, resulting in a questionable three-pointer attempt by Randy Usher, which was no good, as time expired, consequently extending the Rebels’ losing streak against the Belmopan Bandits to now 7 games, as they fell by the final score of 76-75. Despite the loss, the Rebels had all the ingredients in place to secure the win. They outrebounded the Bandits, 40-35; had better ball distribution, with team assists totaling 26, compared to their opponents’ 19. They were better in the paint, 34-26; and their bench outscored the Bandits bench, 17-10. They shot at a higher clip from both the field and the free throw line, at 39% and 57%, respectively, in contrast to the Bandits’ 36% and 42%. How they lost is anyone’s guess.

Defending NEBL champs, the Smart Hurricanes survived a ferocious fourth quarter surge by the visiting Dangriga Dream Ballers on Friday night at the St. Catherine Auditorium, to record their second straight win in the 2017 NEBL championship.

After jumping out to a quick 22-13 lead in first quarter of play, the Hurricanes obviously felt good about their chances of winning back-to-back games for the first time in 2017. However, the Dream Ballers responded with a 9-2 mini run early in second quarter play, to pull within two of the Hurricanes, 24-22. But an ensuing 8-4 run by the Hurricanes closed the half with the score 32-28 in favor of the Hurricanes. 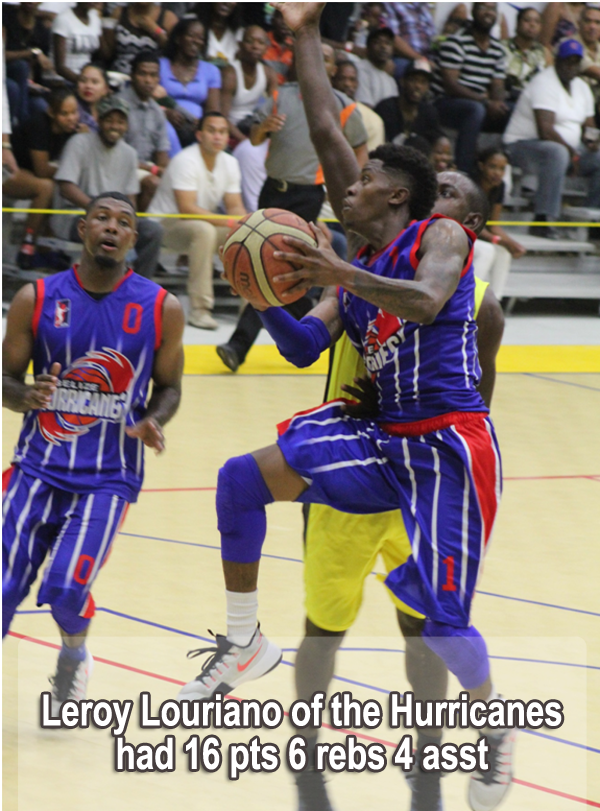 Third quarter play was ugly for the Dream Ballers, as they only managed to score 9 pts, thereby enabling the Hurricanes to increase their lead to 51-37 at the end of three quarters of play. But, as the saying goes, “every team will make a run,” and tonight was no exception, as the kids from Griga opened the fourth quarter with an inspiring 13-3 run, to pull the score at 54-50 with 5:14 remaining in regulation. Winston Pratt (20 pts 7 rebs 3 assts) of the Hurricanes then went to work, driving for a layup, to extend the lead to 56-50. Baskets by Leroy Louriano (16 pts 6 rebs 4 assts) and Andrew Ortiz pushed the Hurricanes lead to 61-58 with 1:29 remaining; but the Ballers would not go away, as Tahj Wells’ quick hands led to a steal and a layup, to put the game at 61-60. But four blown offensive opportunities by the Dream Ballers in the final 24 seconds spelled their demise, as time expired with the final score showing 62-60.

Quinton Bowen led the visiting Ballers with 16 pts 17 rebs 2 assts, while teammate Dillmore Conorquie contributed 10 pts 4 rebs 4 assts. As a team, they shot a lethargic 29% from the field, hitting on only 24 of 82 shots attempted. They outrebounded the Hurricanes, 60 to 47, were superior in the paint, 32-28, and their bench was better than the champs’, outscoring them 21 to 5. So, where did they lose this game? At the charity stripe, statistics revealed that the Hurricanes attempted 28 free throws to the Ballers 15, and hit on 14 of them, compared to their opponents 8. 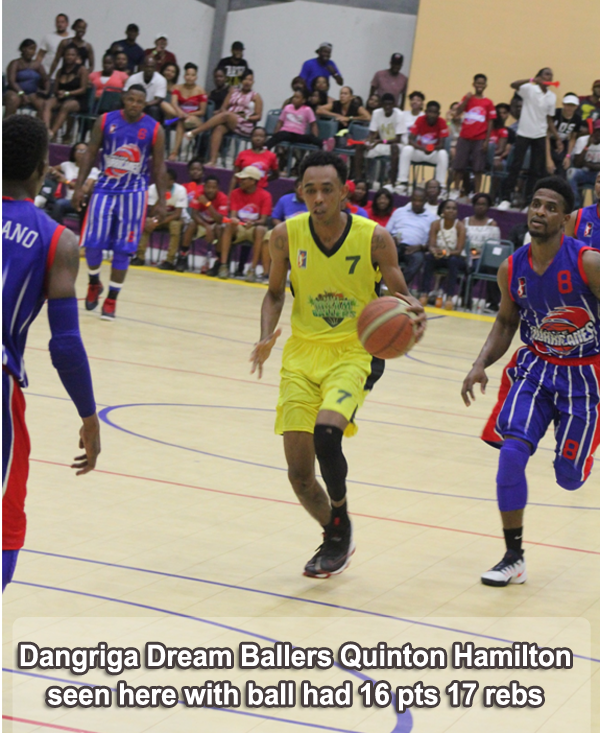 Belize City No Limit must have certainly felt confident on the road at the Sacred Heart College Auditorium last Friday night, holding a 10 point 46-36 fourth quarter lead with only 8:58 remaining in regulation, and on their way to notching their first win of the 2017 season. But an ensuing 17-10 late fourth-quarter run by the hometown Western Ballaz quickly turned opportunity to misfortune. Led by Daniel Nolberto’s 12 fourth-quarter points, 4 steals, and Darwin Leslie 4 pts 2 steals, the Western Ballaz displayed remarkable resiliency, to pull out the big 63-56 win.

Darwin Leslie had 14 pts 2 rebs 4 assts in the win, and was assisted by teammates Daniel Nolberto 14 pts 2 rebs 1 asst, and Brandon Flowers 11 pts 7 rebs. As a team, they shot 31% from the field on 20 of 64 shooting. They shot a poor 4 for 22 from beyond the arc, and had 38 rebounds as a team. They had solid contribution from their bench, with 26 points, and took good care of the ball, with only 12 turnovers as a team.

In contrast, the visiting No Limit team was careless with the ball, committing 28 turnovers, with Kevin Brown and Lincey Lopez being responsible for 13 of those 28 turnovers. As a team, No Limit shot 35% from the field, and were even more miserable, at a 1 for 15 clip, from long distance. They, however, rebounded the ball well, totaling a game high 54 rebounds as a team, but their inability to take care of the ball was their demise. Kenny Brown was their high scorer, totaling 16 pts 7 rebs, followed by Marcus Lewis 13 pts 13 rebs. With the loss, No Limit now falls to (0-4).