Imer Hernandez, well-known contractor, who was with Ayuso in the pickup, is recovering in the hospital.

ONTARIO, Cayo District, Thurs. Oct. 31, 2019– Nelson Ayuso, 41, a businessman of San Ignacio who is originally from Orange Walk, died as a result of massive head and body injuries he suffered when he was involved in a road traffic accident on the George Price Highway at about 10:30 Tuesday night. 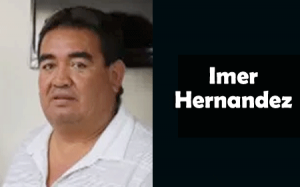 Police said that Ayuso was with Imer Hernandez in a Sierra pickup and they were traveling toward San Ignacio when Hernandez, the driver of the pickup, lost control of the vehicle between Miles 55 and 56 (between Ontario and Blackman Eddy) and ran off the road.

The George Price Highway is undergoing extensive reconstruction in this area, and it is believed that Hernandez lost control of the vehicle in loose gravel, after which the vehicle leapt over a drain and crashed into a pile of rocks.

Ayuso reportedly died almost immediately after the impact. Hernandez, a well-known contractor, was injured in the accident and is now recovering at the hospital. Doctors have declared his condition as stable.

Police said the pickup was extensively damaged and it was found on the right side of the road.

According to the United Democratic Party (UDP) newspaper, The Guardian, Ayuso was a stalwart supporter of the ruling UDP.