Home Features OAS mandate does NOT extend to the Sarstoon
Features

OAS mandate does NOT extend to the Sarstoon 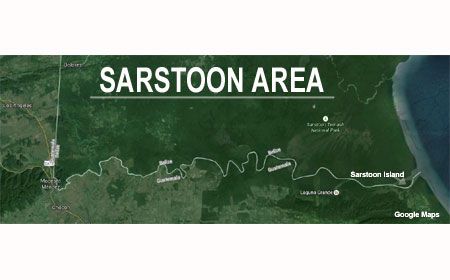 BELIZE CITY, Fri. July 24, 2015–Back in 2003, Belize and Guatemala agreed to a set of confidence-building measures under the regime of the Organization of American States (OAS), under which the adjacency zone, spanning a kilometer on either side of Belize’s western border with Guatemala, was established.

Under the agreement, new settlements inside that zone were to be banned and a procedure was outlined for dealing with persons in violation. Also, the area became subject to a regime of joint patrols by soldiers from Belize and Guatemala.

Of note, though, is that this OAS-led regime—which has been strictly terrestrial in scope—has not been applied to southern Belize, where the Sarstoon River forms a natural border between Belize and Guatemala, running clearly south of Sarstoon Island.

Along this southern riverine expanse, Belize security officers have continued to carry out their surveillance to fight illegal fishing, logging and migration, which are pronounced problems in Southern Belize. It was for this reason that law enforcement authorities attempted in May to locate the best site for a forward operating base (FOB) in the Sarstoon area, and the Coast Guard officers tasked with the mission were supposed to erect that base at that location before returning to base.

However, things changed when the Guatemalan navy challenged the presence of the Belize Coast Guard on Sarstoon Island, claiming it as their territory. The Coast Guard team, led by Commander Elton Bennett, refused to leave and stood their ground until the mission was called off by Prime Minister Dean Barrow, a former National Security minister who is also head of the National Security Council.

So far, Barrow has not explained his decision, but it has recently been revealed that the Guatemalans have strongly objected to Belize’s attempt to build the FOB in the Sarstoon area, not just on Sarstoon Island.

So where will the FOB be built? As we have previously reported, law enforcement officials deem the area near the mouth of the Sarstoon to be the most suitable location. But we understand that even so, the objection of the Guatemalans stands.

Multiple official sources have indicated to us that the protest lodged verbally by the Guatemalans is that until their claim is adjudicated by the International Court of Justice (ICJ)—albeit there is no approval from voters in the countries to support the matter going to the ICJ—no new activities should occur inside what Guatemala contends is a “buffer area.”

We were told that the Belize position was clear: that there is no such buffer area in the south, and contrary to Guatemala’s objections, the FOB would be built in the Sarstoon area, because it is badly needed to stave off illegal activities by both Guatemalans and Hondurans who frequent the area.

However, Foreign Minister Wilfred Elrington told the media last week that the FOB project has been put on pause until the parties have had a chance to meet with the OAS. Elrington has also said that the construction of the FOB has already been delayed for several years—a delay which has not been explained.

How soon Belize will embark on the construction of that base remains to be seen; waiting until a possible ICJ resolution would certainly mean several more years without a proper surveillance base.

There have been suggestions in certain circles that the OAS jurisdiction should now be expanded to the southern border; however, that could vastly change the surveillance mechanism in southern Belize, and some Belizeans will be sure to view it as an erosion of Belize’s sovereignty.

To date, Belize has maintained its stance, in the face of Guatemala’s resistance, that it owns Sarstoon Island and continues to exercise jurisdiction over that area; however, the Government’s decisions since May 2015 to (1) have the Coast Guard withdraw from Sarstoon Island in the face of Guatemala’s protest, and (2) hold off on the construction of the FOB until an OAS meeting planned for later this month, are being viewed in the public domain as actions which are compromising Belize’s full exercise of sovereignty over the area.

We are told that the adjacency zone, within which the OAS regime applies, ends at Gracias a Dios, at Belize’s southwest border with Guatemala. The OAS mandate does not extend to the river or Belize’s maritime space.

Notwithstanding Guatemala’s position, there is no “buffer zone” in southern Belize subject to the OAS regime.