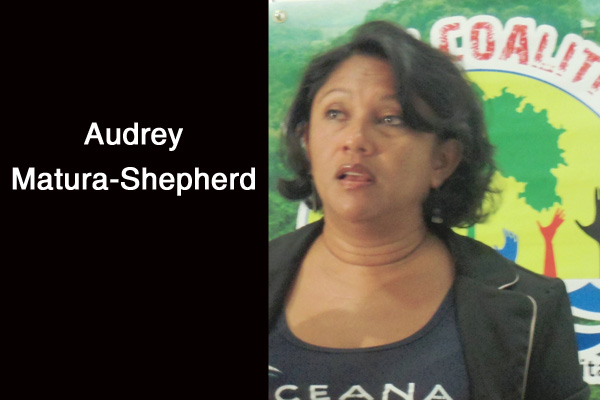 Oceana in Belize Vice President Audrey Matura-Shepherd held a press conference today, Wednesday, to update the media on the status of offshore drilling in Belize.

The press conference was to be focused on the recent court ruling on the organization’s case which challenged the granting of offshore drilling permits by Government to energy companies to operate in Belize.

But what seems to have taken over the meeting, were the plans of one oil company –Treaty Belize Energy— to resume operations in Belize. Matura stated that the company still plans to drill for oil in the country.

Those plans are being made despite the April 16, 2013 Supreme Court ruling that all offshore drilling contracts are null and void — meaning that by law they don’t even exist.

Treaty Belize issued a press release on Tuesday, May 7, stating that they have sought legal advice from their attorney, Rodwell Williams of Barrow and Williams, and have decided to proceed.

Matura-Shepherd said that Oceana’s response to that decision is to wait and watch, and if any operations do resume, they will seek court action by way of enforcing an injunction.

”That’s just a statement that they say they would proceed,” she said, adding, “We need to then be vigilant and get the evidence that they did proceed and we then need to find Government’s acquiescence to that or tacit encouragement or, in anyway, involvement in allowing them to proceed and then we will seek enforcement of our injunction.”

”In no way can the Government [use] one hand to facilitate or encourage in any way any oil company to implement any provision in the contract,” she said.

She said that that although the court has ruled the contracts unlawful, enforcement of that is still necessary.

”The court said, ‘we declare them unlawful’ but a declaration is not a mechanism that just says then, ‘oh by itself it means that you have to enforce it,’” she said. “It simply means that you have to do something else to enforce it, so what the court did, not to leave us in limbo, was to put in place an enforcement mechanism which was the injunction, which was to say to the government, ‘not only have I told you those contracts are unlawful, null and void but I am telling you, you can’t move a finger to do anything to carry out that contract,’” Matura went on to say.

Matura-Shepherd said that the Government’s responsibility would be to notify all contractors there has been an injunction placed against them.

She added that it is not the contractors’ place to decide whether they continue to operate, but it is the Government who is to police the matter and ensure that the law is upheld and the contractors do not go ahead with any operations.