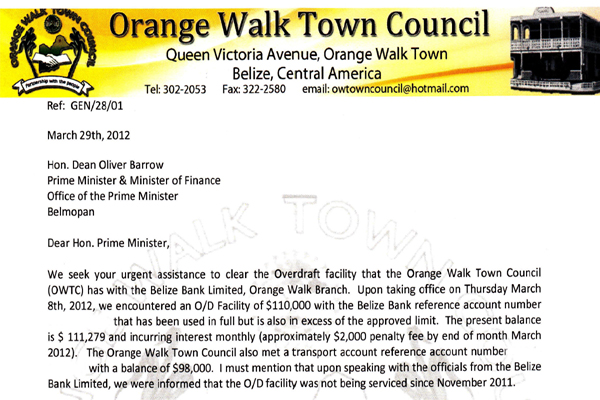 Orange Walk Mayor Kevin Bernard told Amandala today that their council has been able to reach a temporary arrangement with the Belize Bank, under which the Sugar City is now mandated to pay $7,000 monthly for at least the next three months towards an $110,000 overdraft facility that had been maxed out before he came into office last March. According to Bernard, the Belize Bank intends to revisit their arrangement next January.

The agreement was made to facilitate the payment of $15,000 in salaries for weekly-paid workers last Friday, and another $22,000 due today, Monday, to administrative, traffic and other personnel who get paid twice monthly. He said that there are about 110 employees total on payroll.

Bernard told us that since their monthly subvention of $33,333.33—which barely covers their sanitation bill of about $32,000—goes directly to the Belize Bank, the bank would immediately deduct the $7,000 to pay down the overdraft.

Last Friday, Bernard reported to two of the major television stations that the Council’s bank account had been frozen, because of the old debt. That action locked up a little over $42,000 of the Council’s funds, Bernard informed.

During a meeting of the House of Representatives on Friday, Prime Minister and Minister of Finance Dean Barrow made a statement, saying that Central Government would not release a penny to help the Council unless Bernard gives an account of how every penny of the Council’s funds are spent. (Bernard told us that their accounts – though unaudited – are published online (at owtc.bz), making the council’s finances transparent.)

Mayor Bernard (of the Opposition People’s United Party) first wrote Barrow last March, a few weeks after assuming office, to request the Ministry of Finance’s approval to continue operating the overdraft facility with the undertaking that the debt would be cleared and the facility capped at $75,000. Bernard told Barrow that the approval was needed to help the Town Council meet its financial obligations.

Bernard told Amandala today that when they came into office, they met an overall debt of $280,000: including $54,000 unpaid to the Social Security Board (unpaid worker deductions).

Bernard said that former Prime Minister Said Musa approved the overdraft facility back in 2006. He said that the former People’s United Party mayor Philip de la Fuente had been cutting cheques against the overdraft account up to August 2011. He said that since they took office in 2012, they had been paying a little over $2,000 every month – but that just offsets the interest accrual. Most recently, the bank made a decisive stance, freezing the Council’s account and requiring them to look seriously into settling the bill.

Bernard said that they did not receive a response from the Government until last week, when Financial Secretary Joe Waight wrote them in a letter dated Thursday, September 26, declaring that the Government would not be able to extend any assistance to them outside the monthly subvention approved in the FY2013-2014 budget.

In the House of Representatives on Friday, Barrow also said that he had gathered that “they’ve raised property taxes and they are closing people down when they don’t pay.” He said the Orange Walk Town Council has raised trade license fees.

“You must learn to paddle their own canoe and properly manage an account for the monies that you collect,” Barrow said.

Mayor Bernard told us that the Council has been “trying to work on collecting property taxes,” and he concedes that they have raised fees but said that the plans had already been in the works before the municipal elections of 2012.

He said that the Council had also deliberated about instituting a garbage collection fee but they decided against it, because of hardships citizens face in meeting current fees and taxes.

The Orange Walk Town Council is additionally locked in a dispute with a prominent politician. Bernard said that they are being sued by Denny Grijalva, owner and managing director of De’ Mar’s Stone, who contested the last general elections for the ruling United Democratic Party in Orange Walk Central and whose company is facing charges for the destruction of the Noh Mul Maya monument.

In Parliament on Friday, Prime Minister Barrow also highlighted “the fancy vehicle the mayor drives,” questioning whether the mayor has been splurging while the Council has been suffering financial hardships. “If you can’t afford it, don’t buy it,” Barrow commented.

Bernard said, however, that the 2008 Ford Escape he drives is his personal vehicle, bought with funds he borrowed from La Immaculada Credit Union after selling his prior vehicle.

“I was taken aback that [Barrow] would have done something of such nature,” Bernard said, expressing his dismay at the Prime Minister’s comments. He said he is willing to supply documents as proof to the Prime Minister, since he has nothing to hide.