P.G. stars light up the MCC 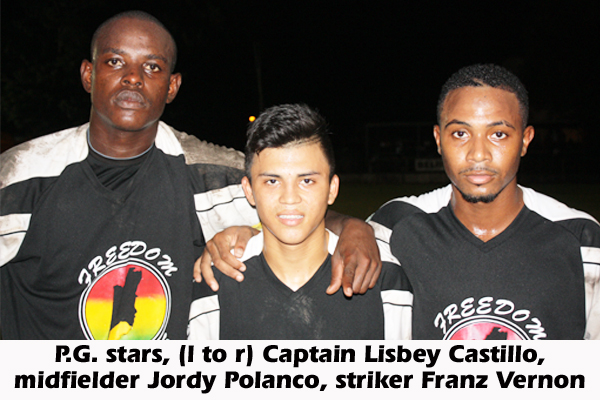 The MCC lights are far from adequate for night games, and the pitch was still mucky from the heavy rains going into the weekend, but football fans were pleasantly surprised yesterday by some real exciting attacking football from visiting Paradise/Freedom Fighters of Punta Gorda, and especially by the football artistry displayed by their diminutive midfield rookie, 17-year-old Jordy Polanco, whose superb ball and body control in tight spaces, coupled with incisive and accurate passing, harkened some older fans back to the time of Anthony “Garrincha” Adderley in the 1970’s. Not since then has a player so small in stature created such a big impact on a top level game at the MCC.

But if that wasn’t enough, it was proven to be no accident that a heretofore unknown was the leading goal scorer in this Premier League of Belize Belikin Cup Opening Season 2013-2014; for P.G.’s 22-year-old Franz Vernon showed that he is the “real McKoy,” displaying impressive speed and remarkable endurance in attack for the full 90 minutes, coupled with a striker’s heart and intelligence, unleashing powerful and accurate shots at goal with both feet, fearlessly facing tough tackling from the highly respected F.C. Belize defenders, and alertly pouncing on the split second “daylight” afforded him by PLB’s Best Defender Leon “Chow” Cadle, to drive home the game tying goal for his team.

Going into yesterday’s game at the MCC, F.C. Belize was fresh off a stunning 3-2 victory over Belmopan Bandits last Saturday night in Belmopan; and Paradise/Freedom Fighters were also off a 1-nil home win against the cellar dwelling but dangerous San Ignacio United at the Toledo Union Field.

Nothing can be taken for granted in this tournament, and reports of the Verdes FC 2-nil defeat of former league leading Belize Defence Force on Saturday night was a clear reminder that making it to the 4-team playoffs in this current season is not yet guaranteed to any team. Before the first half had ended yesterday at the MCC, reports were already circulating that San Ignacio United was leading 2-nil over Belmopan Bandits at the Norman Broaster.

There were a few grumbles early in yesterday’s match from some fans who complained of boring games with few goals for a ten-dollar fee. Indeed, the last two F.C. Belize home games at the MCC had resulted in a 0-0 draw against the Bmp Bandits on September 29, and a 1-0 win over San Ignacio United on October 13. That is 1 goal in 180 minutes of football, and perhaps not particularly exciting football at that. But those gripes were quickly appeased yesterday when attention became drawn to a refreshing spectacle developing in the middle of the field, where this young football artist was earning ooohs and aaahs from fans with his tight turns and changes of direction with the ball, his deft passing, including clever back-heels, beating defenders and eluding dangerous tackles … the kid was doing it all, and football fans at the MCC soon acknowledged that there was something special happening at the Garden.

But Paradise/Freedom Fighters is not all about sensational rookie midfielder Jordy Polanco. This team has abundant talent and, despite the defensive risks associated, has committed to playing attacking football; in fact, it would best be described as total attacking football, and it makes for a thrilling match. For not only is their highly skilled sweeper Frank Lopez, formerly a BDF and national team goalkeeper, often venturing all the way up in the attack on the right flank, but his defensive stopper Mario Villanueva is also a frequent member of the attacking front line. (It was on one of those “Liborio” style runs that Frank had blasted their second goal to seal the 2-nil victory over Belmopan Bandits in P.G. at Week 3 of the Belikin Cup.) And, though Jordy is officially in midfield, he actually plays more in front of captain Lisbey Castillo, and covers a wide swath of the pitch, so he is not only intimately involved in the attack, but gets a lot of leg work done defensively on both midfield flanks; while the tall and experienced Lisbey anchors the central area of the pitch, both on attack and defense. This type of attacking flair could only be successful with committed and skilled midfield flank men, and the Torres cousins, Ashley on the left and Delone on the right, keep the P.G. midfield tight; along with fluid adjustments from their tough defenders, Justo “Inks” Cacho on the right and Onest Martinez on the left. P.G. goalie Stephen “Cranker” Polonio also did a fine job in goal.

Former FC Belize coach Marvin Ottley, commenting with Mervin “Rugged” Flores during the Channel 7 telecast of yesterday’s game, observed that the forages in attack by P.G.’s sweeper and stopper, Frank Lopez and Mario Villanueva, respectively, could be exploited by F.C. Belize in the counterattack. But the striking P.G. duo of Alexander “Pleck” Peters and league-leading goal scorer Franz Vernon were enough to keep the F.C. Belize defense in survival mode. It was in fact a series of defensive miscues, starting with a missed clearance from their left corner post, that eventually led to the ball bouncing across goal for F.C. Belize’s veteran midfielder Mark “Kelo” Leslie to pounce on the loose ball and slap in the first goal of the game, which came a couple minutes before the whistle to end first half. It was a lucky break for F.C. Belize, who were generally being dominated in play by the P.G. squad, who had many more chances at goal up to that point. Some stalwart defending by Shannon Flowers, Luis Arriola, sweeper Leon “Chow” Cadle and Jorge Estrada, along with spectacular goalkeeping by last season’s Best Goalkeeper, Glenford Chimilio kept P.G. off the scorecard in first half.

F. C. Belize’s rookie striker Devaughn Zuniga has some bright days ahead, but he is still adjusting to the “semi-pro” level, and Jarret Davis could not manufacture enough space to properly unleash his trademark left foot shot. In their midfield, young Kevin Lino also played very well, and the veteran Mark “Kelo” Leslie is still a force. Avian “Chiches” Crawford, who replaced the injured Jorge Alexman in midfield early in first half, and Steven “Breds” Baizer, gave good account in midfield, but the balance was obviously tilted in favor of the visitors.

In second half, it was more of the same – P.G. on the attack, and F.C. Belize holding on to their 1-nil lead; but it seemed only a matter of time before P.G. got their goal, with shots coming more frequently, including a Lisbey Castillo left foot bullet that glanced off the outside of the right goal post. P.G. inserted James Logan to replace Delone Torres at the 20th minute of second half; and new F.C. Belize coach Fred Garcia, Jr. responded a couple minutes later with Ryan Gill replacing the tiring “Breds” Baizer. And, to further protect their 1-nil lead, Garcia also brought in Christian Perez in midfield to replace forward Devaughn Zuniga. But P.G. would not be denied.

It was an FC Belize goal kick that Lisbey reached first at midfield, returned it on the volley straight down the middle, where the lurking Franz Vernon had a little breathing space against the approaching Leon Cadle, and after only one touch Vernon quickly let fly a low right foot shot that FC Belize goalie Chimilio saw coming too late, as it dashed passed him into the left corner; 1-1 ball game.

And that’s the way it ended, 1-1 at the MCC. It was a great game, though on a difficult playing pitch.

(Ed. Note: It could have been an even more beautiful game, with more goals, but the MCC field was a mess, unnecessarily; because there is inadequate perimeter drainage after days of rain before the weekend. Sports Council has to do better. Football can’t wait until January for “renovations.” At least, fix the drains NOW; and show some respect for our footballers and the fans.)