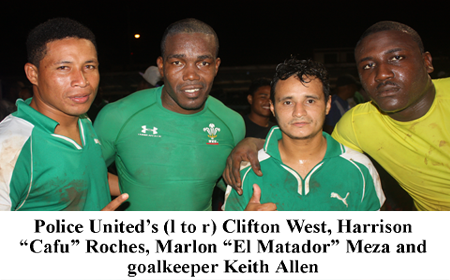 BELIZE CITY–That’s why they play the game. You just never know. Four days ago, the newly energized Verdes football club was on top of the world, leading the playoffs with 8 points and 2 games remaining. The Bandits had 7, and Police had 6, after suffering back to back losses (1-0 and 4-0) to the same Verdes FC. (The 4-0 loss was on Wednesday of last week, New Year’s Eve, not Sunday as we had erroneously reported in last issue.) Needing only a draw this past Sunday, January 4, at the Norman Broaster Stadium to tighten their grip on a spot in the finals, the Verdes organization, which has done an exceptional promotional job for the game, was feeling very confident. (See standings for Wednesday, December 31.)

But on Sunday, January 4, Belmopan Bandits pulled out a 1-0 win over Verdes FC in Cayo, on a Shane Armstrong goal in injury time, pushing the Bandits to the top of the standings with 10 points. The Saturday night before, Police had to break a 1-1 deadlock with BDF in the closing minutes to come away with a 2-1 victory, and this put Police at 9 points, right behind the Bandits, leaving Verdes in third place with 8 points. Amin “Tacos” August, Jr. (17’) had given Police the lead, but BDF’s Shane “Chucky” Flores (83’) equalized late in second half. Police’s winning goal came two minutes later from their “prodigal son,” Clifton West (85’), whose return to their line-up provided an important missing piece to their offensive arsenal. (See standings for Sunday, January 4.)

But “D-Day” Wednesday, January 7, would settle everything, and Verdes was still in a position to secure a spot in the finals. All they needed to do was beat Belize Defence Force (BDF), who were already out of the race with only 1 point from a draw and 4 losses. But those BDF losses were all hard fought matches, and none had been at the hands of Verdes. In their only regular season meeting, the last game of regular season, Verdes had drawn 0-0 with BDF at the Norman Broaster Stadium. And in their next meeting to start the playoffs the following week, again at the Norman Broaster, they had played to a 1-1 stalemate. Their last playoff meeting last night was at the BDF home field, People’s Stadium in Orange Walk, and BDF had nothing to gain, except respect, a very important thing in sports as in life, as they had no chance of reaching the finals; while Verdes had everything on the line in their quest of a finals berth. Aside from the possibilities in the other game taking place at the same time in Belmopan, Verdes needed a win to be sure of a finals spot. A draw would only help if Police lost to Bandits, in which case, at 9 points each, Verdes would prevail over Police with the better goal difference.

So there was a lot of tension in the football air last night, both up north at the People’s Stadium in Orange Walk and out west at the Isidoro Beaton Stadium in Belmopan. At People’s Stadium, Verdes could not afford to play for a draw, because they had no way of knowing the outcome at Isidoro Beaton, as both games were being played at the same time. Meanwhile, at the Isidoro Beaton Stadium, Police and the Bandits had to “go for it,” because a victory by Verdes at People’s Stadium would definitely knock one of them out, Police or Bandits, depending on who had the most points at the end of their encounter. So, nobody was “taking any prisoners.”

Well, on a damp and slippery clay pitch at the Isidoro Beaton Stadium in front of hundreds of dedicated fans, there were some close calls in first half, which nevertheless ended nil-nil. Two minutes into the game, a cross goal pass by left midfielder Danny Jimenez saw a good opportunity missed by Police striker Lennox “Criminal” Castillo; and a minute later at the other end in the northern goal, a hard right foot shot from 30 yards out by Bandits right midfielder David Madrid saw Police goalkeeper Keith Allen making an impressive diving snatch from high in the right corner. Six minutes later, a long swerving left foot cross from Bandits striker Elroy “Bibs” Kuylen found his right side teammate Jerome “Jarro” James all
alone for the header about 15 yards from goal; but Jarro stumbled on the slippery ground, and his weak header went aimlessly off the field. But the best opportunity of the half came about 8 minutes before the intermission, when a center by Bandits midfielder Jordy Polanco on the right side caught Police goalie Keith Allen coming out and misjudging the flight of the ball; Jarro got the lucky bounce and had a chance to send the ball into the open goal from 12 yards out, but Police defender Kishane “Grill” Pech was alert on the play, and dropped back in time to clear Jarro’s soft lob just before it crossed the goal line.

Second half was similarly filled with close calls on both sides, but it was Police who made the first personnel adjustment, as they inserted striker Marlon “El Matador” Meza in place of Criminal Castillo about 9 minutes into second half. And the renewed energy and aggressiveness of Meza paid off just 5 minutes later, as he made a hard run to near the goal line on the right side and sent a perfect centering cross back to about 5 yards beyond the penalty arc on the left side, where it found an advancing Harrison “Cafu” Roches all alone for the square volley past a diving Woodrow West in goal for the Bandits. 1-nil, Police in front.

Bandits’ coach Edmund “Buzzard” Pandy responded immediately with the insertion of the tall and talented young striker Highking Roberts in place of David Madrid, and the offensive intensity of the Bandits visibly increased. Indeed, Roberts’ impact was so evident that it seemed puzzling they should have kept this “secret weapon” on the bench for so long in such a critical game. Police coach Andres Makin saw trouble brewing and quickly, some 5 minutes later, replaced hard working defender Grill Pech with the fresh legs of young Jermaine Jones with what appeared to be special instructions, for Jones was immediately on Roberts, like “white on rice.” Nevertheless, the second half was dominated by the Bandits, who wasted a number of opportunities, and saw a few good saves from Police goalie Keith Allen who was kept very busy. The best chance for the Bandits came about the 78th minute, when a center from Kuylen on the left came across to Roberts on the right side, and Robert’s header back towards the penalty spot found the chest of teammate Khalil Velasquez who was momentarily stunned by his point blank opportunity at goal. But Khalil’s too hasty attempt dribbled feebly to the outside of the left goal post.

There were a few occasions when, after making a leaping save in goal, Police goalie Keith Allen stayed on the ground for a while in apparent pain, resulting in a few delays of game, and causing referee Louis Lucas to add an extra 7 minutes onto regulation time. But Police held on till the long whistle, and the celebration began.

But, even while the Police players and fans were jumping in celebration, the word soon spread that BDF had defeated Verdes, 1-nil, in Orange Walk. Verdes’ were therefore automatically tossed out of the finals. (See final playoff standings below.) Though dejected and disappointed by their own 1-nil loss, the Bandits squad had very little time to despair and lament, because fate had smiled on them; they were in the finals, thanks to BDF.

Perhaps it is fitting that the Belmopan Bandits organization should have gotten that fortunate turn of events last night, for it was not too long ago that, as back-to-back PLB champions, they had suffered bitter disappointment in their failed Champions League endeavor through no fault of their own. The FFB had failed to prepare the stadium in time to meet CONCACAF standards, so the 2014 Champions League berth earned by the Bandits was given to Club Herediano of Costa Rica on August 12 of last year.

Evidence of the suffering inside the Verdes FC camp is a press release this afternoon stating that the club had “launched an official protests against BDF FC based on the fact that BDF FC fielded two players who were ineligible to participate in that match as a result of BDF FC not paying the fines for sanctions brought against those players in a previous game…”
If Verdes’ protest were successful, and the result against BDF were reversed, it would mean that Verdes, with the additional 3 points, would go to the finals against Police, replacing the Bandits.

It is unfortunate for the sport whenever matters that should be settled on the field of play get dragged into boardroom battles.

There has been no word yet from the League, except that the championship finals begin this Saturday in Belmopan between the Belmopan Bandits and Police United.