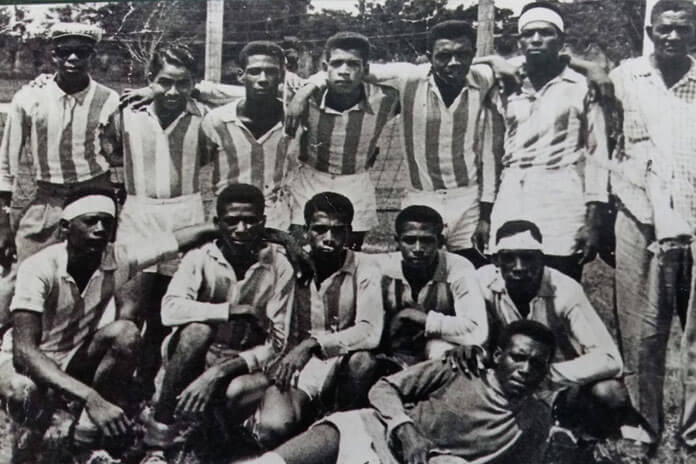 BELIZE CITY, Mon. June 8, 2020– Legendary Landivar goalie from the 1950s and 60s, Charlie Gardiner revealed a prize piece of information, if you were one still in the business of scoring goals, and the one Wilfred “Palma” Davis were still active between the sticks; which of course is no longer the case.

But if yours truly had chanced upon that bit of football intelligence two generations ago, a certain play might have gone differently.

Of course, I was never a powerful shooter or a great goal scorer. But I had goal scoring instincts, and, like many footballers, I have scored a few in my time.

It’s a tired old scratched record among old folks: “If I knew then, what I know now…”

As a youth, one of the gems I picked up from older players coming up, where making much of a “bruk through” was concerned, was that, when you find yourself “one-on-one” against a goalkeeper, you should always go to the “far corner.” And it has never failed me.

But there was one time, one time only that I can remember, that I ever broke that rule in a game; and I regretted it.

The Islanders from Caye Caulker were “kicking up some dust” in the 1974-75 Belize City competition, since myself in midfield, Rudolph “Toad” Bowen in defence, and Guillermo “Cutty” Cutkelvin in the forward line, had added some experience to the youngsters from the island. (Diamond A had folded; I was teaching in Belmopan; and the new season was well under way, when my Diamond A teammate, Cutty gave me the call to come and join him and Toad.) The Islanders were winning a few games, even trouncing an early edition of Charger, some “green” youngsters led by Jerome “Pealoff” Maheia, by a 7-1 score, in which I scored one from midfield.

On this particular Sunday, we were facing solid contenders BDF; and the legendary veteran, Wilfred “Palma” Davis was in goal for the army. To be truthful, I can’t even recall the results of that game; because something else stood out in my mind. (Some older fans may recall that game.)

Slicing through from midfield, I had found space in their defence, and was suddenly driving down on the right side toward the BDF goal, near the Guinness Pavilion on the north end of the MCC. If it was any, any other keeper in goal, I know exactly what I would have done; what I had always done, instinctively, and confidently, and always successfully in that situation. I would have gone “to the far corner.”

But I didn’t get to speak with Charlie Gardiner until 45 years later today.

In my mind at that split second in time, the great Palma knew that I would do the smart thing, and go “to the far corner;” and he would be ready for me. So, I would surprise him. He had allowed a small space between himself and the near, eastern goal post, about five feet; from about fifteen yards away, I would put it right there.

What Charlie told me, is that he had trained Palma for a short while in the late-1950s, and as good as he was, Palma’s one weakness, according to Charlie, was that he always played too near to the close goal post. So that, one Diamond A striker named “Tannico” Haylock had developed a reputation that he always scored on Palma, in the far corner. I wonder if that’s why that saying developed – “go to the far corner”? It certainly seemed natural to me; and always worked. But on that fateful day on the MCC, Palma’s weakness became his strength; or you might say, I outsmarted myself, to Palma’s benefit.

I have heard a number of elder fans remark that Palma was one of the best ever in goal, because of his knack at positioning himself in goal to make it look easy. Ironically, Charlie Gardiner differs, holding the view that one aspect of his positioning was Palma’s weakness.
It is always good to arm yourself with knowledge. Unlucky for me, Charlie Gardiner was not available to share his insight with me back then; as one William Lindo was there to lend his wisdom to another goalie, to help him stop my penalty once at the MCC. But that’s another story.

(I have been trying, unsuccessfully, to contact Palma by phone for a couple months now. His daughter, Nicole, gave me his phone number in Little Rock, Arkansas, USA; and I did speak with him briefly last year about Dunlop. Palma had spent time in hospital, and was recovering from a heart operation. Hopefully he is well, and someone alerts him about this article, so that we might get a response from him.)

Feature photo: Palma is the goalkeeper in front in this circa 1959 picture of Dunlop (from the cover of Evan X Hyde’s “Sports, Sin and Subversion”)

BELIZE CITY, Thurs. Oct. 1, 2020-- As we are about to go to press tonight, a bombshell 5-page release from the Football Federation of...
Read more
- Advertisment -