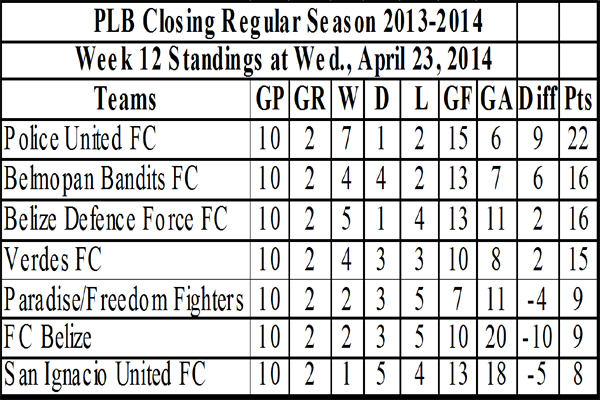 With consecutive mid-week fixtures and games played through the Easter weekend, the regular season is fast drawing to a close in the 2014 Premier League of Belize (PLB) Closing Season 2013-2014. The top 4 regular season finishers go on to the semifinal playoffs.

Here are the updates on Week 10 and Week 11 games played on Wednesday, April 16, and Saturday, April 19, respectively; and Week 12 games played last night, April 23. One Week 12 game, FC Belize hosting Verdes FC, takes place tonight at the MCC, and it is a must-win for FC Belize, if they are to keep their very slim playoff hopes alive.

Week 10: All games were on Wednesday night, April 16. At the Isidoro Beaton Stadium in Belmopan, Police United dropped Belmopan Bandits, 2-1, with goals from Clifton West (35’) and Harrison “Cafu” Roches (83’); while Denmark Casey, Jr. (55’) scored for the Bandits. Here in Belize City, it was BDF, 1-nil, over home standing FC Belize, as BDF striker Stephen Martinez unleashed a right foot volley from a rebounded free kick, that found the right pigeon hole and gave FC Belize goalie Elroy “Zabble” Rowley no chance. The 3rd minute goal stood up for the victory, as FC Belize young striker Michael Whittaker was hobbled by a left knee injury, and their other main striker Jarret Davis was serving a suspension from a red card in the previous game. The other Wednesday game saw Verdes and San Ignacio United play to a 1-1 stalemate at the Marshalleck Stadium. Anthony Gonzalez (24’) gave the visitors the first half lead, but Marlon “El Matador” Meza (40’ PK) got a late equalizer from the penalty spot for the home team.

Week 11: Because of deadlines that must be met for the CONCACAF Champions League, even the Easter weekend could not disrupt the Week 11 games of the Premier League Closing Season. All 3 games were played on Holy Saturday night. At the Isidoro Beaton Stadium in Belmopan, defending champion Belmopan Bandits had goals from Denmark Casey, Jr. (44’), Elroy “Bibs” Kuylen (47’) and Jerome “Jarro” James (49’ & 82’), as they crushed visiting FC Belize, 4-0. Meanwhile, further west at the Marshalleck Stadium, the visitors were successful, as Police United got the 1-nil win over Verdes FC, with a first half strike from Danny Jimenez (37’). And down south in Punta Gorda at the Toledo Union Field, the visitors were again victorious, as an injury time goal gave San Ignacio United the 4-3 win over Paradise/Freedom Fighters. Shaking the net for San Ignacio were young Trimayne Gentle (25’ & 58’), Anthony Gonzalez (34’) and the veteran Wilmer Garcia (90+’); while the Freedom Fighters’ goals were by Franz Vernon (20’) and Darwaine “Cayo” Castillo (21’ & 77’) .

Week 12: Two Week 12 mid-week games were played last night. At the Isidoro Beaton Stadium in Belmopan, visiting Paradise/Freedom Fighters shocked home standing Police United, 2-1, with goals from Darwaine “Cayo” Castillo (12’ PK) and Frank Lopez (80’); while the Police goal was by Devon Makin (38’). Meanwhile, at the Norman Broaster Stadium in San Ignacio, the visiting Belize Defence Force FC came away with the 2-1 win over San Ignacio United. San Ignacio jumped to a first half lead with a penalty conversion by Anthony Gonzalez (11’ PK), but the army rebounded in second half with goals from Leonardo Valdez (53’) and John King (82’).

The other Week 12 game takes place tonight at the MCC, where FC Belize must win against Verdes FC to keep their playoff hopes alive. Even a draw knocks FC Belize out of playoff contention. San Ignacio United can no longer make the playoffs. FC Belize and Paradise/Freedom Fighters still have a mathematical chance, but both their hopes depend on Verdes losing tonight against FC Belize.

Following the upcoming weekend Week 13 games and mid-week Week 14 games next week, the home-and-away semifinal playoffs are scheduled to commence next weekend with seed #1 vs seed #4 and seed #2 vs seed #3.