BELIZE CITY, Mon. Nov. 11, 2019– It went “down to the wire” indeed, as the final playoff spot in the Premier League of Belize (PLB) 2019-2020 Opening Season was only determined in injury time of a Week 14 game in San Pedro on Saturday night. This past weekend’s Week 14 games ended the PLB regular season; but the 2 games scheduled for Sunday had no bearing on the playoffs, while the 2 games on Saturday night were critical to determine whether Wagiya FC or Altitude FC would grab the 4th spot in the playoffs along with Verdes FC, Bandits Sport and San Pedro Pirates FC, all 3 of whom had already secured a playoff berth.

At the M.A. Stadium in Independence on Saturday night, Norman Anderson’s (52’) goal stood up in regulation to give visiting Verdes FC the 1-nil win over Altitude FC, who thus remained stuck at 21 points with a -4 goal difference. Meanwhile, at the Ambergris Stadium, where the Wagiya FC vs San Pedro Pirates FC game had started at the same time, breaks in the action allowed this match to be prolonged a few minutes. At the time the game ended 1-nil in Independence, Wagiya led, 2-1, over the Pirates on the island, with first half goals from Luis Domingo (20’) and John King (33’ PK), while Facundo Garnier (43’) had scored for the Pirates. The victory would push Wagiya from 18 pts to 21 pts, same as Altitude, but with a better goal difference (See standings below). It seemed all over for Altitude FC, and a playoff dream come true for Wagiya FC; but deep into injury time, a desperate lob into the Wagiya eighteen saw Pirates striker Henry Vivas collapse after a collision with a Wagiya defender, and young referee Mark Milligan pointed to the penalty spot, as he had done in first half in favor of Wagiya. This time, it was San Pedro’s Facundo Garnier (90+4’ PK) converting to tie the game at 2-2; and that’s how it ended after 7 minutes of extra time. In a sudden turn of events, the 1 point from the draw left Wagiya FC at 19 points, and Altitude FC at 21 points had secured the 4th and final spot in the PLB Opening Season playoffs. 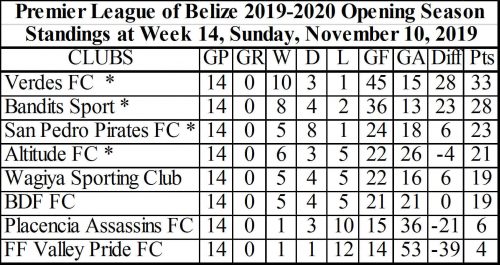 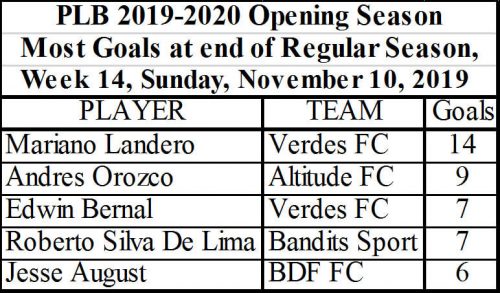 The top 4 playoff teams above (*) will commence their home-and-away semifinals next weekend (#1 vs #4, and #2 vs #3), as the PLB playoff stalls this coming weekend to allow for the Belize National “A” Team’s engagement in CONCACAF Nations League matches against French Guiana on Thursday night at the Isidoro Beaton Stadium, and on Sunday against Grenada in Grenada.

Facebook
Twitter
Pinterest
WhatsApp
Print
Previous articleIf OJ did it, here’s how he did it
Next articleDrinking turned deadly: Lee Lopez, 41, fatally stabbed in chest with broken bottle