The dead thief and 4 others reportedly had jacked a businessman who was about to make a deposit at Scotiabank on the Northern Highway. Police have the other 4 accused thieves in custody. 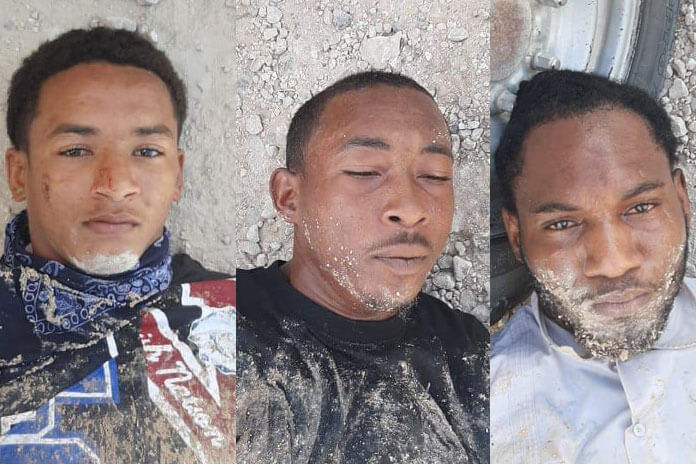 BELIZE CITY, Thurs. July 2, 2020– A man about to make a bank deposit at the Belama branch of Scotiabank on the Philip Goldson Highway was robbed at about 3:00 p.m. this afternoon in the bank’s parking lot by a group of thieves who were traveling in a van.

The thieves got out of the van and pointed a gun at the man and stole his money bag, but as they drove away, police, who were on patrol near the parking lot, were alerted of a robbery in progress and fired shots at the culprits in the parking lot as they made their escape with the money.

Commissioner of Police Chester Williams, in a virtual press conference this evening, told the media that there was a high speed chase by police which came to an end at the end of Seashore Drive, when the criminals stopped their vehicle and jumped into a boat that was moored in the sea near the shore.

A witness in the area who saw what was happening said that the outboard engine propeller on the boat had become stuck in the mud of the shallow water near the shore, and despite the robbers’ efforts, the boat could not move, and that was when the police, who were in pursuit of the robbers, were able to draw closer to them and fired at them.

According to police, two of the robbers were wounded by the bullets fired by the officers, and the other three surrendered to the police; they were all arrested.

A guard in the area who witnessed the incident told us that it happened quickly.

Of the two thieves who were hit by the bullets fired by the police, one was wounded in the neck and the other in the arm. They were rushed to the Karl Heusner Memorial Hospital, but unconfirmed reports are that the robber who had been hit in the neck had died.

Commissioner Williams said that the stolen money bag and two guns were recovered in the boat, and three robbers were taken into custody, while a fourth robber is currently hospitalized and is under police guard. The fifth robber’s body is in the morgue.

Commissioner Williams said that the policemen reacted quickly and were fearless in the capture of the robbers, and thanks them publicly for the good work they did. He pledged that they will be rewarded.

Facebook
Twitter
Pinterest
WhatsApp
Print
Previous articleAn old hero told me we need women to keep on the straight and narrow
Next articlePM Barrow loses again… and we the people will pay!