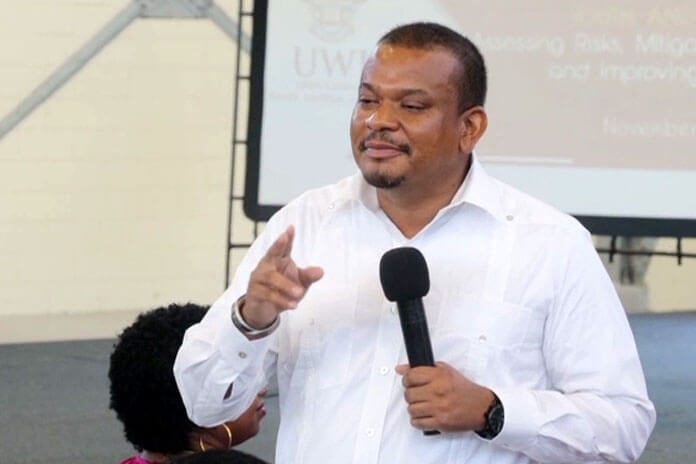 BELIZE CITY, Thurs. Nov. 7, 2019– There was one notable absence at the Cabinet meeting on Tuesday. Minister of Education, Youth, Sports and Culture, Hon. Patrick Faber, was not present, because he was a guest speaker at the University of West Indies’ (UWI) 2019 Country Conference in Belize City.

Faber did not have to face his Cabinet colleagues, many of whom turned up on Sunday in support of Hon. John Saldivar, the Belmopan area representative vying for the party leader post that Faber is also contesting.

Faber used the occasion to make comments that can only lead to him being further isolated from his Cabinet colleagues, in the run up to the United Democratic Party leadership convention.

Addressing the question of crime, especially in the constituency of his rival for UDP leader, Hon. John Saldivar, the Deputy Prime Minister said, “Look at the problem of crime and violence in our country… the Belmopan, Roaring Creek and Camalote areas are getting a little out of hand, but by and large, it is a problem in the city. Four miles by five miles, how far the city goes, Mayor? Maybe it is six… And it is right in this little block that the majority of these murders, especially those that are gang-related, are happening, and you will tell me that we can’t fix this problem?”

Minister Faber explained to his audience that the Cabinet meeting was going on, but he decided to attend their function instead of going there. “I am still going, eventually, and hopefully…the meeting will still be going on. I decided to come this morning because this is very important for Belize,” he said.

In a direct reference to Saldivar, Faber stated, “My opponent had a big shindig at the Civic, so I don’t want them to think that I don’t want to show up today because they intimidate me. I am a young person. I know how to take on challenges.

“For now, I will say I don’t care whether you intend to vote for red or blue. Register. You know how much young people still haven’t registered? Then when the politicians do foolishness, you sit down and talk, what that one and what that other one is doing…Your fault. Get out and agitate for the kind of leaders that you want. Right now you have choices to make. In the next term of government, come hell or high water, we will have a different prime minister, a different kind of leadership, altogether. You know who has a say in that, whether you are a delegate for the UDP and PUP in these leadership conventions? You do. I am not trying to tell anyone to vote for the UDP. Nobody goes from here and quotes me wrong.”

Faber, who has served as Minister of Education and who has been responsible for putting together the last ten education ministry budgets for hundreds of millions of dollars, had this to say about the government’s priorities when it comes to young people:

“But you know that the bulk of the money that we spend in education is really spent in paying salaries. All the teachers … complain their salaries are not good, but they get a huge chunk of what we spend in the Ministry of Education, Youth, Sports and Culture.”