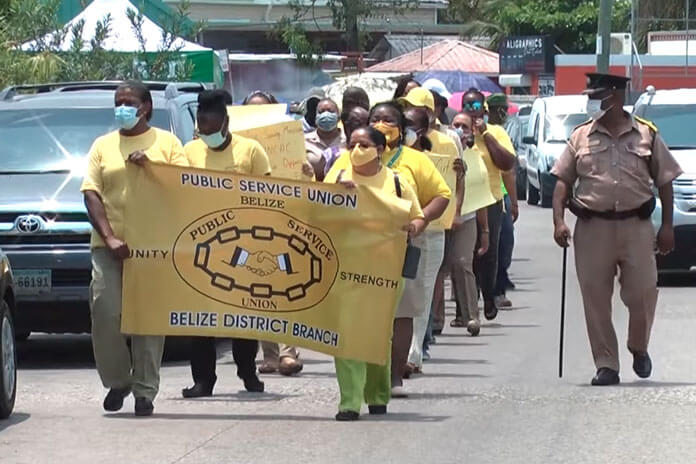 BELIZE CITY, Sun. May 2, 2021– The Public Service Union’s 21-day notice to the Government of Belize will expire on Monday, May 3, and the union’s president, Gerald Henry, has announced that industrial action by the union’s members will officially commence on Tuesday, May 4, 2021.

As a prelude to the looming strike action, members of the Public Service across the country staged a walkout at noon on Friday, April 30, 2021. In Belize City, a small group of about 60 public servants marched in protest along Freetown Road with police escorts under the midday sun.

Members of the Belize National Teachers Union, who are currently also at odds with the Briceño administration over the 10% cut to the salaries of public workers, are already on strike. The union has also joined members of the public service in calling for the implementation of good governance legislation.

According to union officials, branches staged walkouts and marched countrywide, which marked only the start of protests by the unions. Henry also confirmed, as was seen on Friday, that the BNTU and the Association of Public Service Senior Managers (APSSM) have taken a stance of solidarity with the union.

The Joint Unions Negotiation Team is holding firm in their opposition to government’s salary cuts, even though GOB has pushed through its proposed 80-million-dollar cut in this year’s budget. Henry told local media that the majority of the membership for all the unions are in support of the Joint Unions’ fight against the government.

On April 13, the Minister of the Public Service, Hon. Henry Charles Usher, informed the unions of his decision to fix salaries under section 106(3) of the Belize Constitution. This provision, according to the Attorney General, Hon. Magali Marin-Young, “empowers the Minister responsible for public service to fix the salaries of public officers.”

In a recent Cabinet release, the Government of Belize reiterated its intention to proceed with the salary cuts, despite a ramping up of industrial action by the BNTU and now the PSU.