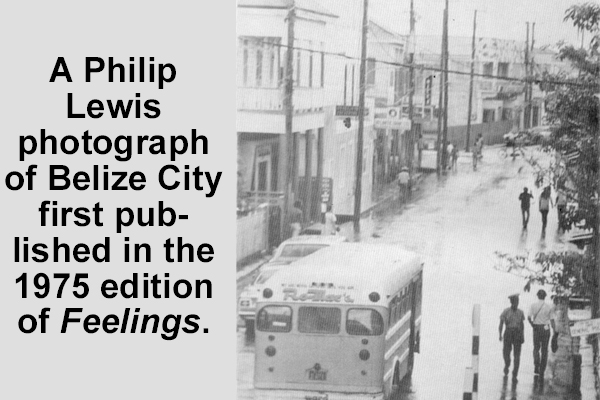 Since my parents moved to Buttonwood Bay some six or seven years ago, I’ve spent many, many hours selling newspapers at our old family home at the corner of Regent Street West and West Canal. I’ve had time to look around my old neighborhood, examine the wreckage that remains, and yes, dream of reconstruction.

My old family home is no. 1 West Canal, but between 1954, when I moved to the ‘hood, and Hurricane Hattie in 1961, our home actually used to be no. 3 West Canal, which was a three-storey wooden house. A lot of the yard at no. 3 was cement, because the ground floor, before my time, used to be a bakery.

When I first went to no. 3 as a seven- year-old, my grandmother used to rent out the front sections of the downstairs. The tenants were a Hispanic tailor by the name of Carrillo on the southern side, and a Jamaican shoemaker by the name of Anderson on the northern side.

In 1954, my Hyde grandparents lived on the second floor, along with two of my uncles and two of my aunts. Later, my grandfather took in two of his nieces who had been orphaned when one of his sisters died somewhere in the Stann Creek District. (Some people would call this the first floor, because what I call the first floor they would refer to as the ground floor. In any case, this was the middle section.)

My parents and we children lived in the top section, which I would call the third floor. Between 1947 and 1961, my mother gave birth to nine children, of whom I was the oldest. My dad had chicken wire placed on top of the verandah railing to prevent us from falling downstairs when we were playing football or fighting.

Across the canal from us, corner Regent Street West and East Canal, was the Georgie August meat shop. Mr. and Mrs. August and their children lived upstairs of the meat shop. In the evenings when they disposed of meat scraps by throwing them into the canal, the catfish which lived plentiful in the canal would go wild in feeding frenzy.

In the middle of the East Canal block across from us, back a little distance from the street side, sat the tall Barrow home, where Mr. Ebenezer Barrow had raised his children, which included the father of Belize’s present Prime Minister. (The Barrow home also had a Regent Street West entrance.)

Across the alley from us on West Canal, going south, was the bakery owned by Mr. Julian Romero. Down the alley there were homes owned by the Leslies, the Reneaus, and the Clarkes.

Next to the Romeros, going south, there were the families of Georgie August’s sister, Irene, and the Waights. Across Water Lane from the Waights was the Usher’s bakery, operated by Mr. Eddie Usher and his wife, Miss Polly.

Hurricane Hattie at the end of October 1961 flattened our three-storey wooden residence. When I arrived in the capital city from Central Farm a week after the storm, the house had been reduced to a heap of rubble about five feet high.

A few months after that, after sojourns at Camp Oakley outside of Burrell Boom, Freetown Road, and Adams Lane, we took up residence in what remained of no. 1 West Canal, whereupon my father contracted family carpenter and handyman, the late, great Simeon Ebanks, to begin reconstruction of the wooden building, from which we now sell Amandala from the upstairs.

From where our family home stands, you can look across the Haulover Creek and see the North Front Street office building of the legendary Bob Turton, Belize’s dominant native businessman of the first half of the twentieth century. Across the canal you can also see the girls section of Holy Redeemer School, the “new” Parish Hall, and Holy Redeemer Church. Until just a while before he died, you could see, any day of the week you chose, Mr. Price going home from 5:30 a.m. Mass at Holy Redeemer Church. He walked down North Front to Pickstock Street, then turned right.

In the old days, the big excitement would be when BEC and other mahogany contractors slowly towed their logs, chained together, down the river to the harbor mouth for shipment overseas. These days, the action on the river is the skiffs of the fishermen heading out to sea early in the mornings, or returning to deposit their catch at Northern Fishermen.

My mom kept us confined to our yard. As the oldest, I was under the most pressure. My mom managed to get me out of Belize on a university scholarship when I was 18 years old. At the time, I had no police record of any sort, and my only questionable habit was that I liked to drink rum with Coca Cola and lime, especially at parties. I call the habit “questionable,” because Belize’s culture was absolutely an alcohol culture when I was growing up. So my mom did her best with me. What happened after that is all my fault. She had kept me out of trouble, but when I became of age I began looking for it, trouble, that is.

The question is now, how do raise your boy children in Belize City in 2013? If you raise them under too many restrictions, you are choking off their natural, healthy male tendencies. But if you let them run free, they will become involved with boys their age who are targets of the police. Belize City’s has probably become a marijuana culture, and marijuana was arbitrarily declared illegal by the white supremacists who run Belize. That is why most of our young Belizean males are targets of the police, and that is why so many of them now have a police record. It’s because of the weed, a herb gift from the Lord which the white man outlawed.

My old neighborhood, in the larger sense, now features ferro-concrete business buildings owned by foreign business people. Those homes still owned by Belizeans are crumbling. Most of the Belizean families from my old ‘hood have gone to the States or moved to the suburbs or the cayes. In my siblings’ case, of the seven surviving children, two live in Buttonwood Bay, one in West Landivar, one in Coral Grove, two in Camalote, and one in Arizona. This is a pattern with the old Belize City families. Belizeans who were in a position to do so, abandoned the city.

But foreign business people have invested in huge cement structures in the old capital, and they buy almost any of the city real estate which Belizeans choose to sell. The downtown financial area of the city remains heavy prime real estate, while two blocks away drugs and dilapidation are the order of the Belizean day. There are contradictions here which are somewhat confusing.

All I can say is that a sociological transition has taken place. That is clear. What is not clear is where all this is going. Belize City is the political stronghold of the ruling UDP. If it is Mayor Darrell Bradley who is the spearpoint of whatever plan the Barrow administration has for the old capital, then it appears that the future is more about infrastructure than about roots people. Personally, I always thought people were more important than things. But, this may be what the young people call “old school.” We used to have a way of life which has gone away somewhere.

Quo vadis, city of my youth?