In these my senior years, it is usually uncomfortable for me to read material I wrote as a young adult, such as The Crowd Called UBAD, written in 1970 when I was 23 years old. Such material often strikes me now as immature, hence the reason for my discomfort. Still, the material provides a historical record of the era in British Honduras (Belize), and it is therefore relevant and valuable.

In my column today, I will quote from the aforementioned The Crowd Called UBAD with respect to the early days of the United Black Association for Development (UBAD), which was founded on February 9, 1969, with the following executive:

In reading over the material reproduced below, I realize now that the United States Consulate was interested and involved in these early UBAD affairs, and I have a better idea of how people around me were responding to whatever it was the Consulate was doing.

Incidentally, I found the several pages of advertisements which helped to finance the printing of the publication very interesting to peruse. As one example, we reproduce an ad for Colt 45, a malt liquor which was being pushed by Santiago Castillo, Ltd. back then, 47 years ago.

The first public meeting of the United Black Association for Development was held at Free Gardiner’s Hall. Copies of the constitution were sold for .15 cents, and about fifteen or twenty people applied to join the organization, amongst them Assad Shoman.

UBAD had one executive but three different directions. Shabazz and Justice were Muslims, Clarke and Belisle were anti-Latin, I was into a Malcolm X–Stokely Carmichael Third World black power bag.

For our next meeting we returned to Liberty Hall, a bit of maneuvering having been done by Clarke and Arnold. Clarke was absent from the meeting so I took the chair as first vice-president and invited Shoman to speak, which he did. Some people did not dig Shoman because his wife was white.

At this meeting Silky Stewart created an uproar by taking out a picture of Fidel Castro at Liberty Hall and urging people to buy it instead of pictures of the Queen and the Archbishop of Canterbury, who was then visiting Belize. One member named Faber immediately called for his entrance fee to be returned and left the meeting saying that he was not going to join any communist movement. Wilhelm Arnold almost fainted.

Shortly after this Wilhelm had a run-in with Tony Meighan when he went to get something printed in THE BELIZE TIMES paper and Meighan said he was not going to print anything about any UBAD in his paper. (Check the article on the front page of THE BELIZE TIMES dated Saturday, February 22, 1969.) 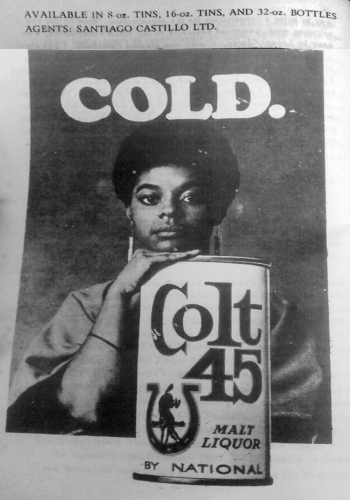 Bad news the next week. Rumours hit the grapevine that Clarke, our President, was in some trouble at the Princess Royal Youth Hostel. The rumours went wild over the city. Yeri-so about beatings, pregnancies, raping, escape, lashings, disappearance in the jungle, etc. Brothers and sisters, this was a confusing time for all of us. We were all numbed with shock.

Clarke said nothing to us about the rumours. It was clear that he was under a tremendous burden. Night after night he and his workers would leave the city to search for the girl on the road.

Finally, at one executive meeting, Belisle demanded an explanation from Clarke, and he gave us one but it satisfied none of us.

Nearing the middle of March we held our first public meeting at the Courthouse Wharf. The President spoke but he seemed shaken, and the whispering campaign continued. THE REPORTER offered a $25.00 reward for information leading to the whereabouts of a girl Dorothy Burke.

Well, the day we were to visit Stann Creek Town for the first time (a Saturday), Ronald Clarke, the President’s brother, came to my house on Kelly Street and asked me if I would support his brother in the crisis. I agreed, and he gave me certain information about the role being played in the whole shebang by one Smith, at the time an American Vice-Consul.

I wrote a letter of support for Clarke. The whole UBAD executive was supposed to sign it, but because of the rush to go to Stann Creek and the printing deadline of THE BELIZE BILLBOARD, only Stewart and I signed the letter and handed it to Mr. Frazer at the BILLBOARD office. (Check BELIZE BILLBOARD of Sunday, March 16, 1969.)

The visit to Stann Creek was interesting. Clarke did not accompany us, but Shoman preceded us along with his wife and made all the arrangements. We held the meeting at the Town Hall. Shoman spoke on the UBAD constitution, and Justice, Shabazz, Stewart, myself, and Allan Castillo from Stann Creek Town spoke. The same Castillo who is now Senator in the PUP government.

Shoman and Castillo seemed to know each other fairly well. Evidently on his travelling tours as Crown Counsel, Shoman had met Castillo, among others.
It was on this trip that we the UBADers met Mrs. Velasquez, through her daughter Therese, who used to work at the Agriculture Department in Belize City but is now working with Medical in Stann Creek Town. Mrs. Velasquez over the months that UBAD has been working, has treated us with real togetherism every time we go there.

Anyway, things blew up when we got back to Belize City. The Monday I got back to Technical there were three different calls for me from the American Consulate. I started wondering whether they would sue me because of the charges against the Vice-Consul in the letter.

That evening was the UBAD executive meeting. It was held at my home on this occasion. Clarke started talking about some American Consulate party he had attended, so I asked him about the Vice-Consul and he, Clarke, said that Smith was his friend. This was contradictory to what Ronald Clarke had told me, that Smith and Minister Silva were conspiring to get to his brother on account of the scandal.

Man, I don’t dig being a sucker so I started saying (loudly) that there was going to be some trouble because I was not going to apologize to Smith or the American Consulate and if there was any scenery coming my way the whole bag would be torn open.

The meeting started to become heated. Then there was a knock on the door. Arnold walked in. He said he was going to the show with his wife but wanted to know if we had gotten the letter. Which letter? Arnold said he had handed in his letter of resignation to Clarke earlier in the day because he, Clarke, lied to him about the relationship with Smith, the American Vice-Consul.

Clarke was on the spot. He had not given us the letter or even told us about this. He said he had kept the letter hoping that Arnold would change his mind. Well, like fuel added to fire. Big argument started.

After the meeting ended, about eight of us got together and decided we better ask Clarke to resign. And it was at a meeting in late March at the Princess Royal Youth Hostel that we asked Clarke to resign and he did.

At the next executive meeting I was elected President. I was hesitant to accept the position. It carries a lot of responsibility and your private life becomes totally public. Being first vice-president is much easier. You’re an officer, but you don’t have too much responsibility.

We then decided to ask Edgar Richardson to fill the vacant post of councillor in the organization. Later in the week he was approached, and he accepted the post.

This executive meeting, it should be pointed out, was the first held at No. 45 Hyde’s Lane, the downstairs of a building which we rented for our office. Led by Livingston one Sunday, we cleared and cleaned out the place, built some benches, and a desk and a bookcase, put up a blackboard, and painted a sign “UBAD HEADQUARTERS”, which still hangs outside the building.

The rent was $25.00 a week and all the UBADers were very proud of the office. We put a few pictures in the office, Malcolm X and Hon. Elijah Muhammad, and gathered old black newspapers and books and put them in the bookcase for members.

We obtained an old record player and a few records, including Malcolm X’s classic recording – THE BALLOT OR THE BULLET. And we beat out.