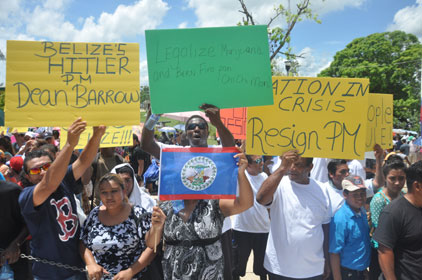 BELIZE CITY, Mon. Sept. 5, 2016–The Opposition People’s United Party (PUP) parliamentarians walked out of the last House of Representatives meeting two weeks ago in solidarity with their Cayo South representative who was clumsily named by the Speaker when he tried to address the House on the blistering Auditor General’s Special Report, which highlighted massive irregularities at the Immigration and Nationality Department.

On Wednesday, the PUP plan to hold the “mother of all demonstrations” in Belize City, where the party has not demonstrated for about twenty years.

Deputy PUP Leader, Hon. Cordel Hyde, told Amandala tonight that the demonstration, called “Save Belize,” is geared toward sending a message to Belmopan that the people are tired of government corruption.

Hon. Hyde said that since the UDP came into power in 2008, more Belizeans have become poorer.

To give an indication of the anticipated size of the demonstration, Hon. Hyde said that over the weekend, when he was in Corozal, there were already 22 buses scheduled to transport supporters.

“People all across the country are fed up,” Hon. Hyde added, “The tipping point has been this whole audit report.”

“We can’t continue to just talk, we have to act,” he said.

Amandala asked Hon. Hyde what the PUP hope to gain by coming into the streets in huge numbers.

“I think that it will put the government on notice that they have to do better. People are suffering. There is more poverty today than when the government first came into power. Over 325 million dollars of Petrocaribe money have been squandered,” Hon. Hyde pointed out.

“They spent all this money, and what we have to show for it? Nothing”, he said.

“All the major industries in the country are in trouble — banana is down, sugar is down, citrus is down, papaya is down and out, and we still have a government that is still talking as if though they are still very popular,” Hon. Hyde said.

“The Auditor General’s report is the mother of all corruption,” the Lake Independence area rep said.

Hon. Hyde remarked, “I am sure. We have to be prepared to mobilize on short notice, from now on.”