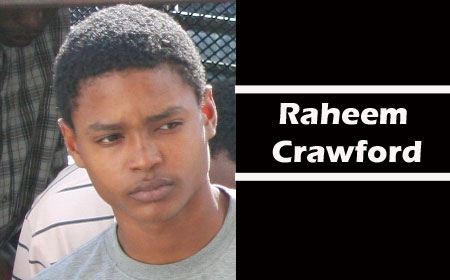 BELIZE CITY—Police say that Raheem Crawford, 20, an unemployed resident of Gibnut Street, died after he was shot by a gunman while he and his cousin, Kevin Faber, 25, were travelling on a motorcycle onto Gibnut Street.

The assassin, said police, came from behind a parked car and shot both men at about 3:00 Saturday morning at the junction of Central American Boulevard and Gibnut Street. The men were turning onto Gibnut Street to go home.

Crawford was showing his cousin, Kevin Faber, 25, home from the US for a visit, the sights of the city when they were ambushed.

Crawford was shot in the abdomen and back, while Faber was shot in the neck, from which the bullet exited. They were both taken to the Karl Heusner Memorial Hospital (KHMH) by their neighbor.

Faber survived and was stabilized at the KHMH, but little could be done for Crawford, who succumbed to his injuries at about 4:30 Saturday morning.
A brace was put on Faber’s neck, and he has since been released.

Crawford’s body was taken to the morgue, where it awaits a post-mortem to certify the cause of his death.

Philippa Longsworth, Crawford’s grandmother, told Amandala in an interview that Crawford and Faber had been spending time together since Faber arrived from the United States less than a week ago on a visit, and Crawford was showing him the different parts of the city on the motorcycle.

On Friday night at about 11:00, they decided to go to a club, and a black car was reportedly following them.

When they were going home, the grandmother said, the car was again seen following them, and when they turned into Gibnut Street, they were ambushed by the unknown gunman, who fired about 10 shots at them.

Longsworth said that Crawford had been receiving threats, and many individuals wanted him dead. He had had run-ins with the police, but he had been changing his life, she said.

A police press release of Sunday, August 10, 2014, said that “Police believe that the motive was gang rivalry. It is important to note that Raheem Crawford was a suspect in four recent murders, but due to a lack of witnesses’ support/cooperation, no charges could have been levied on him.”

Longsworth, however, said that she will remember Crawford as a mild-mannered and jovial grandson.

The devastated grandmother said that the man accused by police of killing her grandson is a childhood friend of his. The accused killer, she said, was usually at their house, and he and Crawford went to school together. Crawford had since drifted away and had stopped hanging out with the old friend, now the accused killer, and since then, Crawford had been receiving death threats, she said.

Longsworth said that a postmortem on the body of her grandson is scheduled to be conducted today, Monday.