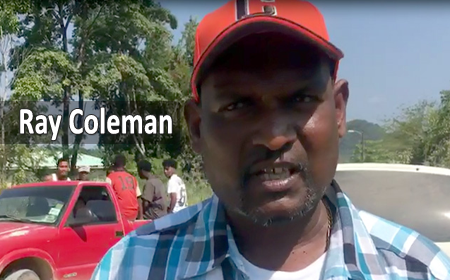 BELIZE CITY, Mon. Feb. 27, 2017–The chairman of Forest Home Village in Toledo, Ray Coleman, led a group of protestors, including youths, who on Friday took to the village streets to decry what they say are unbearable conditions that threaten the health and safety of people in their community.

In an interview with PGTV, Coleman said that the villagers were protesting against what he describes as an injustice: the destruction of village roads by trucks taking quarry materials from the area, causing a dust nuisance. Coleman said that the excessive dust has been affecting his community for the last 25 years, and it happens every dry season.

“Today, our villagers decided to put a stop to it. Also, the condition of our roads; the roads are in the worst condition,” he added.

The chairman also complained that the garbage situation is overwhelming. He told PGTV that he had sent a letter to the Town Council, complaining of the dumping of garbage in their community, but it has not been stopped.

“They are still throwing the garbage there…” Coleman charged, adding that, “The villagers are saying, ‘Enough is enough!’”

While Amandala was unable to reach PG Mayor Fern Gutierrez on the matter, we were able to speak with foreman Leroy Supal, in charge of garbage disposal, who told us that he had heard from someone that a news item was aired on the radio regarding the complaints of Coleman.

“Our truck is not throwing garbage in the area,” said Supal.

He told us that the Town Council has been using the “waterhole area” to dispose of municipal garbage for the past 15-25 years. He said that the site which they use is located about 5 miles out of town, near the Esso Landing Road, and not within the jurisdiction of the village. Supal also told us that he is not aware of the letter to which Coleman referred in Friday’s protest.

So far, we have not been able to speak with the respective authorities at the Ministry of Works regarding the transportation of quarry materials.