BELIZE CITY, Mon. Nov. 29, 2021 — Two teams are undefeated, Rebel Girls FC from the North and Jewel Fury FC from the South sporting perfect 4-0 records at the end of Week 4 in the National Amateur Women League (NAWL) 2021-22 Opening Season. Five more games were played over the weekend, two on Saturday and three on Sunday.

On Saturday out at the Ambergris Stadium, it was San Pedro Pirates FC coasting to a 5-1 victory over visiting Juventus Sugar Girls FC from Orange Walk. Pirates’ goals were by Elva Nunes (1’, 18’ & 22’), Iamara Baptist (29’) and Tanya Teul (36’); while Geidy Andrades (86’ PK) got the lone goal for Sugar Girls.

Meanwhile, down south at the Carl Ramos Stadium in Dangriga, Stann Creek Hyper Jewels clipped Hyper Phoenix, 1-0, with a first half goal from Shadette Lino (11’).

On Sunday, up north at the Santiago Ricalde Stadium in Corozal, it was the visiting Rebel Girls from San Ignacio coming away with a 4-1 win over Corozal United Warriors. Shaking the net for Rebel Girls were Shanae Harris (20’) and Shanay Nazario (42’, 50’ & 76’), while Alisha Terry (47’) got the sole tally for the Warriors.

At the FFB Stadium, meanwhile, it was a monster matchup between two previously undefeated teams, as Belmopan’s defending champion Jewel Fury hosted Rumberas from Independence Town in the Stann Creek District. First half ended 1-1, after Jayda Brown (22’) put Jewel Fury in front, but Roshanny Narvaez (23’) replied a minute later for Rumberas. What proved the game winner for Jewel Fury came early in second half as a Janivi Quroz’ (58’) goal gave them the 2-1 home victory.

Sunday saw action again at the Carl Ramos Stadium, and this time it was the visiting Sagitun Girlz from Independence gaining the 1-0 win over Kulcha United with a second half goal from Reah Burgess (71’). 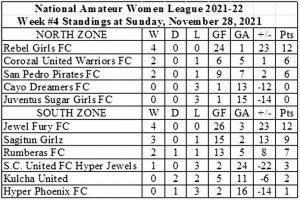