An alliance of foreign and local NGOs had come public in their opposition to the controversial Puerto Azul project, which proposed the construction of the mega resort just 8 miles from the Great Blue Hole. They contend that both the scale and the location of the project should be reconsidered; and indications to our newspaper today are that the original project design is being scaled down. Whereas we were unable to get details, Amandala has been informed by an official source that the National Environmental Appraisal Committee (NEAC) will continue internal consultations this week as it continues its review of the proposed terms of reference for the Environmental Impact Assessment (EIA), and the final document should be available for the next regularly scheduled meeting of NEAC, due to be held on the last Wednesday of the month.

We were told that the finalized terms of reference would also be submitted to the Cabinet Subcommittee on Investments, chaired by Minister Godwin Hulse, who indicated to us today that Puerto Azul is months away from being considered for Cabinet sanction.

“The idea is to begin to look at the island to see if they can proceed with the project,” said Hulse.

He told us that it may be another 4 to 6 months before these studies are concluded and presented to the Government.

Hulse said that it is his understanding that the intent of Puerto Azul is to construct an events facility which could host events like the Emmy Awards hosted in Hollywood. He said that there will be no airport constructed on the reef, but the current proposal is for an existing airport on the island to be expanded. (We note that this is not the concept detailed in the development proposal we saw back in 2013, which showed the airport on the Lighthouse Reef Atoll at another location.) 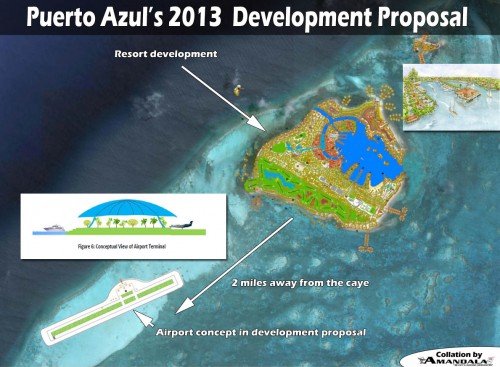 Last Wednesday, when we asked Prime Minister Dean Barrow for his position on the project, in light of calls from the NGO community for a downscaled project at another location, Barrow said: “I don’t quite know what the project is…”

He said that the investors had come to the country and they were told what they needed to do to flesh out their concept.

He said that he did not know how the NGOs could speak with any degree of accuracy, with the proposed project having not been clearly defined.

Barrow said that the NGO group should “check with the chair of the cabinet investment sub-committee just to be sure they are not running off half-cocked.”

When we last spoke with the reps of the NGO alliance, they indicated to us that they had written Minister Hulse, but had gotten no reply, apart from what he had said to the media.

Today, we asked Minister Hulse whether he had received that letter, and he confirmed that he did, but told us that he has “a policy of not responding when I have nothing to say.”

Again, Hulse noted that Government has “a clear program for investments” which Cabinet has outlined. He said that BELTRAIDE will be informed of the results of the Puerto Azul investment study, and that information will also be provided to the Cabinet Subcommittee which he chairs.

If the Subcommittee believes that the proposal is adequate, it would next table it at Cabinet, which would next sign off on a Memorandum of Understanding before they begin to concretize the project. If there are to be any tax waivers, those would also go to Parliament, Hulse said, pointing to “a process that is well established.”

Barrow said last Wednesday that, “…we are not yet at a point where there is anything to complain about,” although he did indicate that he is “supportive of the notion that the watchdog groups ought to be … pre-emptive in terms of discharging their role…”

Roberto Pott, Coordinator of Healthy Reef Initiative in Belize, one of the NGOs in the alliance, told our newspaper that they want to ensure that the proper processes are in place, and they want to sound the alarm now, about what is at stake; what the project, if it materializes, would jeopardize. He said that such a project would never work for Belize in its entirety, and a downscaled version at some other location should be considered.

Janelle Chanona, vice president of Oceana in Belize, said that Belizeans should start asking more questions about the project, which could have far-reaching impacts. She said that while the project could bring jobs, so could putting a Peppers Pizza on top of Xunantunich.

Last year, our newspaper got wind of the company’s development proposal for an exclusive resort, hotel, gulf, villas and spa on Northern Two Cayes, dated April 2013. That proposal included an underwater laboratory as well.

“The project, named Puerto Azul, would transform two private islands on the northern side of the Lighthouse Reef atoll. The brainchild of Italian promoter Domenico Giannini, Puerto Azul was launched during the 2014 Cannes Film Festival at a lavish celebrity-studded party. Belizean ministers of government were also flown in for the occasion,” the alliance of NGOs noted.