Home Headline Yet another San Pedro cop busted; this time for theft
Headline

Yet another San Pedro cop busted; this time for theft 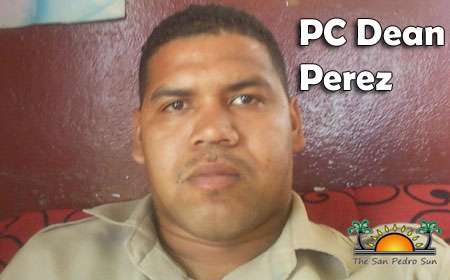 SAN PEDRO–Another policeman has been arrested and charged by the San Pedro police – for theft; the cop’s comrades took him to court like a common thief.

Police Constable Dean Perez was taken before the San Pedro Magistrate’s Court yesterday, where he appeared in front of Magistrate Sherigne Rodriguez on a charge of theft. He was arraigned, after which he was granted bail of $2,000 and ordered to return to court on Friday, December 5, and was ordered to stay away from, and not to interfere with, the complainant.

Police claim that on Sunday morning, October, 5, PC Perez stole $600 and a cellphone valued at $400 from the home of a man, Jose Hernandez, in San Pedro, where he had gone to conduct an investigation.

Inspector Henry Jemott, Deputy Commander of San Pedro police, reported that PC Perez went to Hernandez’s home to conduct an interview to confirm Hernandez’s identity. When Hernandez gave Perez the identification documents that were in his wallet, the constable took the wallet, which also contained $600 cash.

In addition, the constable took Hernandez’s cellphone and left the house.

Hernandez then went to the police station, where he made the report.

Inspector Jemott said that after they received the report, an intense investigation was carried out, during which an identification parade was conducted, and Perez was positively identified.

The file was sent to the Office of the Director of Public Prosecutions, and on Tuesday, October, 28, Constable Perez was arrested and charged.

After the constable was released by the court on bail, he was put on interdiction and suspended from duties as an officer. He will be receiving half of his salary.

Inspector Jemott said that beside the criminal charges brought against him, Perez will also be taken before a police court known as a police tribunal, on these charges and for breaches of a police officer’s conduct.

The police tribunal is empowered to discharge Perez from the Police Department.

Since July 14, two other lawmen from San Pedro have been arrested and charged criminally, with extortion. They are Constable Elvin Nah and Constable Oscar Ramirez.

On Wednesday, July 24, PC Elvin Nah was arrested and charged with extortion. He was taken to the San Pedro Magistrate’s Court, where he was released on bail of $3,000 and placed on interdiction with half -pay.

Police said that Nah arrested a man who was found to be in possession of drugs, and he proposed that the man pay him $400, and in exchange he would not charge him with the offense. The man reported that he paid the policeman eight $50 notes and he was released without charges.

On Tuesday, October 14, Constable Oscar Ramirez was arrested and charged with extortion and was taken to the San Pedro Magistrate’s Court, where he was arraigned, after which he was offered bail of $2,000, which he met.

He was then interdicted from duty with half salary, until he was also dealt with by a police tribunal for breaches of conduct as a police officer.

Police reports are that on that day, a woman was detained on traffic offences. When her son went to the station to see what was happening, the policeman (Ramirez) demanded $1,000 to release her without charges.

The policeman was paid $600, and the woman was released from custody.

Inspector Jemott said that an investigation was carried out and Ramirez was arrested and charged.