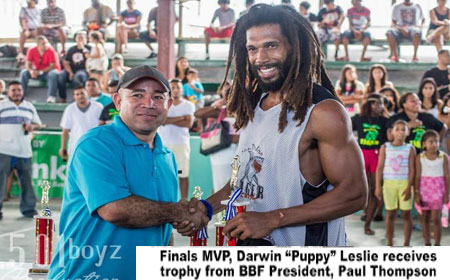 SAN IGNACIO TOWN, Sun. June 7, 2015–The NEBL witnessed the finals rematch, from last year, as the defending champions, San Pedro Tiger Sharks took on the Cayo Western Ballaz. This season, Cayo was the #1 seed going into the playoffs, while last year San Pedro Tiger Sharks had the home court advantage in the finals. The league was treated to a great series, as this is surely the biggest rivalry in the league over its two year history.

Tiger Sharks steal game one against Cayo Ballaz, head to the island up 1-0

On Friday night, the NEBL Finals tipped off at the Sacred Heart College Auditorium in San Ignacio, as the home team, Cayo Western Ballaz (2-1) tried to avenge its loss from last year’s finals; while the visiting team, San Pedro Tiger Sharks (3-1) was seeking to be the first back-to-back champions in the league. The stadium was filled to capacity, with standing room only, as the energy of the fans was very tangible in the arena. The Tiger Sharks jumped out to an early 10-5 lead, but at the half, the Western Ballaz was up 35-28. The visitors had a 55-53 lead going into the fourth quarter, after which they transitioned to a man-to-man defense. Cayo was unable to make the necessary adjustments, their offense unable to get into any rhythm, and the visitors were able to capitalize, where San Pedro stole game 1, winning 77-64.

The top scorer for San Pedro Tiger Sharks was Darwin “Puppy” Leslie, who had the game high 27 pts, while grabbing 4 rebs and coming up with 4 steals. Leslie shouldered the offensive load of the Tiger Sharks, where he hit 4 consecutive shots in the third quarter, while sinking some key, free throws down the stretch. He shot 47% from the field, hitting on 9 of his 19 attempts, while sinking 9 of his 14 free throws, and finishing with the highest game efficiency, at 28. Raul “Thumpy” Roches was also huge in the game, scoring 13 pts to go with 5 rebs and 4 steals; while Milton James finished the night with 10 pts and 5 boards. Andrew “Bynum” Ortiz had a superb game off the bench with 9 pts and the game high 12 rebs, to go with 2 monster dunks that got his team going. Cayo Western Ballaz was led by this year’s MVP, Richard Troyer, who tallied 19 pts, 7 rebs and 2 steals, but shot only 22% from the field, hitting only 5 of his 22 shots. Elvis Usher had 14 pts, hitting 6 of his 9 attempts, while Geovanni Leslie had his best game of the season with 11 pts and 3 offensive boards. Rookie Akeem Watters had an off night, scoring only 4 points to go with 2 boards, while Kurt “Chengo” Burgess finished with 8 rebs, 5 pts and 4 assists….

The series now moves out to San Pedro, Ambergris Caye, where San Pedro Tiger Sharks will try to close off the series on Sunday at 1:00 p.m. at the San Pedro High School. The odds are highly stacked against Cayo Western Ballaz, since San Pedro has never lost on their home court, boasting an 18-0 record. In their last game on the island, these two teams needed overtime to decide a winner. With a win, San Pedro will be crowned NEBL Champions for the second consecutive year, but if Cayo Western Ballaz can pull out a victory, game 3 of this series will head back out west, for the third and decisive game.

On Sunday, Cayo Western Ballaz (3-1) traveled to San Pedro to take on the San Pedro Tiger Sharks (3-2) at the San Pedro High School in game 2 of the best of 3 series, to see who will be crowned NEBL Champions for the 2015 season… The home team jumped out to an early 18-7 lead at the end of first quarter, further extending the lead to 14 points, after which they nursed a 43-41 lead going into the fourth quarter. The defensive intensity, complemented by the huge fan turnout, was palpable on the court and in the arena, which accounted for such a low scoring game going into the final quarter. Cayo was able to take a 50-47 lead midway through the fourth quarter, and with 54 seconds remaining in the game, it was all tied up at 55 points apiece, when the Tiger Sharks went on a 6-0 run to close off the game, sealing the 61-55 victory.

San Pedro Tiger Sharks was led by James “The Hammer” Milton, who had a monster double-double, with the game high 22 pts and the game high 16 rebs. Darwin “Puppy” Leslie tallied 18 pts, 6 rebs, 4 assists and 3 steals; while Raul “Thumpy” Roches finished with 6 pts and 6 caroms. Richard Troyer, who was the top scorer for Cayo Western Ballaz, also had a double-double, netting 21 pts and grabbing 11 rebs. Ivan Flowers finished the game with 10 pts, 3 rebs and 3 assists; while Kurt “Chengo” Burgess scored 9 pts to go with 8 boards, 2 assists and 3 steals. With the win, San Pedro Tiger Sharks swept the 3-game series, winning the first two games, to be this year’s NEBL Champions. The Tiger Sharks remain with a perfect record at home, 19-0, and are back-to-back champions…

The league would like to congratulate the San Pedro Tiger Sharks for their second consecutive championship, while extending kudos to Cayo Western Ballaz for a well played series. The NEBL would like to thank all the teams that participated in this year’s tournament, while extending our gratitude to Belize Bank Limited, for the $20,000 first place prize, Bowen & Bowen Ltd., and Smart as our corporate sponsors. Special thanks to all the fans that came out to support their home teams, to the players, coaches, managers, security personnel, the referees, and the table officials. Lastly, thanks to Amandala and all the media houses that consistently promoted our games throughout the entire season.

Season three is scheduled to commence on January 15, 2016, so all teams and other interested parties can start working on building a franchise to compete for the coveted NEBL Championship.