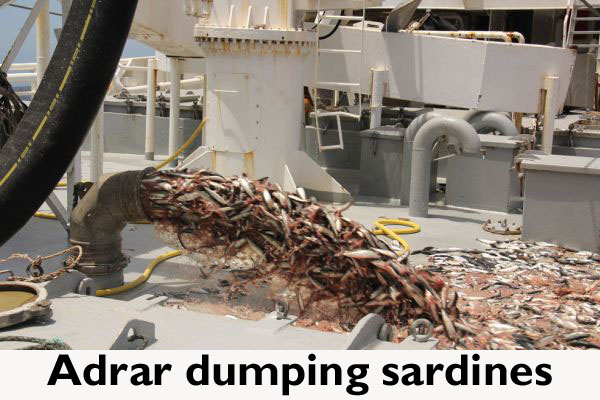 Even as Belize has been slapped with sanctions by the European Union (EU) on allegations of Illegal, Unreported and Unregulated (IUU) fishing by high seas fishing vessels using the country’s flag for convenience to fish in the world’s oceans, environmentalists and activists from the African continent and abroad have expressed outrage at what they described to be wasteful fishing operations by a Moroccan fishing vessel – Adrar – a pelagic trawler which carries the Belizean flag.

However, they are furthermore outraged by the EU’s move to formalize a fishing accord with Morocco, despite these environmentally unsound practices.

The agency Western Sahara Resource Watch (WSRW) released a story last November in which it published a series of photos and a video, showing how tens of tons of dead fish were being discarded in a single day off the Western Sahara, where the Moroccan fishers exploit the fisheries resources in the face of military occupation of that African territory.

When we checked the location of the vessel this evening, via marinetraffic.com, it indicated that it was near Dahkla – a city in Western Sahara under Moroccan control.

“More than 1000 tons [of sardines] have supposedly been discarded this year by this vessel alone. The order to discard the fish is said to have come from the owners of the vessel, Pelagic Armador, in Casablanca, Morocco,” said the WSRW report.

The vessel is 100% owned by LGMC SA, a Moroccan company which cans seafood.

A Greenpeace report launched in December 2013 and titled “Exporting Exploitation: How retired EU fishing vessels are devastating West African fish stocks and undermining the rights of local people”, shows how both EU and Norwegian fishing vessels are being exported to fish in the controversial waters off the territory of Western Sahara, occupied by Morocco. (The fishing vessel was refurbished in Fiskebäck on the Swedish west coast, Greenpeace said.)

Of note is that although Adrar lists Belize as its home state—much like “Citizen Kim” who got a passport without setting foot in Belize—it was exported from Norway to a Moroccan company operating in Western Saharan waters early in 2013, and later registered at Marina Towers in Belize City.

There are also major political concerns over the EU’s decision to enter into a fisheries agreement with that state, despite these practices. The online news site (PRAVDA.Ru) says that, “under international law, the fish stocks belong to the Saharawi people. Why then does Morocco fish these stocks and why does the EU negotiate them with Morocco?”

In announcing developments in December 2013, the EU said that the European Parliament (EP) had approved the EU-Morocco fishing protocol, which will allow 126 vessels from 11 member states to fish in Moroccan waters. It added that the new protocol increases the fishing opportunities by 33 percent, mainly due to increased industrial pelagic fishing (from 60,000 to 80,000 tonnes). The total number of EU vessels that will fish in Moroccan waters is 126, of which around a hundred will correspond to Spain. The above protocol provided for a total of 137 EU vessels, the EU had said.