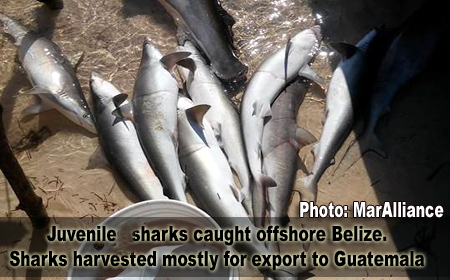 BELIZE CITY, Thurs. Feb. 25, 2016–During the Lenten season, Catholics traditionally eat fish as a substitute for meat on Fridays, and the demand for fish to satisfy this religious tradition in neighboring countries, particularly in Guatemala, is blamed for increased pressure on the shark fishery in Belize at this time of the year.

On Monday, a Facebook post showing 17 images of sharks being butchered went viral, and the post by MarAlliance was followed by a petition calling for a ban on the preferential gears used to snag sharks in Belizean waters. The matter has sparked a fierce debate, with local fishermen cautioning that any hasty action could cost them their livelihoods.

Speaking with the media on Tuesday, Fisheries Administrator Beverly Wade explained that the local shark fishery is a very small fishery. Wade said that for the last three years an average 60 fishers, the majority of them from Belize City, Dangriga and the Independence area, have been licensed, and production has been stable at around 25,000 pounds of shark.

“What I think is unfortunate about this situation is when you actually take the fishermen’s information and parade them on social media like they are common criminals when they are not,” Wade said.

“The majority is salted and goes to neighboring countries, primarily to Guatemala. During this time, we will see the increase in that activity, but after Easter some fishers stop fishing for sharks,” said Wade, adding that the peak for the market is November to March, with particular peaking for Lent and Easter.

Graham told our newspaper that there are many reasons why it is not a great idea to be fishing sharks. She said that large-bodied sharks, such as nurse, Caribbean reef and hammerhead sharks are vulnerable, since they don’t mature until very late, have a very long pregnancy and give birth to few young. She also noted that the key ecosystem and tourism values far outweigh fisheries values. Thirdly, she spoke of the high levels of mercury found in sharks, such as hammerhead and nurse sharks, in a 2006-2007 pilot study she did with a team of researchers.

We had asked the Fisheries Administrator whether it would be a concern if, as had been reported, 32 to 50 sharks had been harvested in the Lighthouse Reef area in a single day—one of several days on which the fishers are known to fish there. “No, it’s not. There is no quota,” she replied. Wade also noted that there are no size limits either.

Only two species of sharks are protected in Belize: the nurse sharks and the whale sharks. Belize does not allow the exportation of hammerhead sharks, but it can be sold locally, Wade said. She also said that there are approximately 200 fishermen in Belize who use gill nets to fish.

“We are on a scary trajectory…” said Dr. Graham, when we spoke with her this week.

Graham told us that, “There is much more fishing this year than there was last year,” adding that the fishers have been targeting Lighthouse Reef, which her research reports have indicated is home to one of the remaining strongholds for Caribbean reef sharks in Belize, although the research also indicated that the majority of animals captured and tagged are not mature—an indication of the adverse impact of shark fishing at the site.

She claims that there were illegalities in what recently transpired, such as gravid lobsters being caught in the fishing nets out of season. Additionally, she said, they caught hammerhead sharks, which were allegedly salted for export to Guatemala.

Her vulnerability assessment of sharks and rays in Belize for the period 2005-2007, and submitted to the Fisheries Department in 2007, documents that “sharks in Belize are scarce where they were once abundant.”

The value of the shark [export] fishery to Guatemala is estimated at US$1.9 million for the past season, divided among 94 fishers, her assessment report said.

The Facebook post, which put the shark fishing debate into the public spotlight, showed the butchering of several Caribbean reef sharks, some of which were said to be juveniles and pregnant females, as well as hammerheads, which are listed by the International Union for the Conservation for Nature as Endangered to Extinction—a rarely conferred title that is indicative of the dramatic decline these species have seen in the past two decades.

MarAlliance argued that “…shark fishing no longer makes any economic sense for Belize.” It also called for a ban on gill net fishing, as Oceana has called, but MarAlliance also calls for a ban on long line fishing, as this is a gear that is also used to catch a range of shark and fish species—even those that are nationally protected.

“I think sometimes you need some gory pictures to move people, for them to see the realities of what it does – [the gill net] catches anything that is out there,” Amanda Burgos, executive director of the Belize Audubon Society, told Amandala.

“How sustainable that is, as a fishery, needs to be questioned, based on the biology of the shark,” Burgos said. “Sharks take a long to reach productive maturity, and they don’t spawn. [Some species] give birth to a couple [baby sharks] at a time.”

“Perhaps the biggest take-home message I would want people to know is that shark fishing is legal, but the legislation needs work,” she said.

She supports suggestions that a good way forward would be to look at size limits and quotas for the shark fishery.

In a press release issued on Tuesday, the Belize Federation of Fishers (BFF) said, “The Federation views the presence of the recent incident as devastating and unfortunate, and stands against the improper use of these gears.” It added that, “We do not support the banning of these gears without an alternative, but call upon the Hon. Minister of Forestry Fisheries and Sustainable Development, under whose portfolio the Fisheries Department falls, to ensure that the policy and regulation that govern the usage of these gears are being adhered to and enforced by those who have the authority to do so.”

Wade said that on Friday she was having a discussion with a group of fishers from Dangriga, whose representative was there to get a gill net license and who was very concerned about the discussion that has been taking place about a ban on gill net fishing.

Mark McKenzie, chairman of the Stann Creek Fishermen Association, told Amandala that they had a meeting today with Senior Fisheries Officer Mauro Gongora, and indicated that they do not support the “absolute green approach,” proposed by MarAlliance, backed by Oceana. He said that the meeting was attended by almost 50 people, the majority of whose primary income is derived from net and long line fishing, and they made it absolutely clear that the Fisheries Department needs to do its part in regulating and tagging nets and holding fishers responsible for their actions.

“Most of the fishers were expressing that definitely they cannot consider a ‘cold turkey’ ban, because they have a whole local economy circulating around the gill net, and they do not see even 10% of their catch being sharks,” McKenzie said.

The association chair said that the matter is expected to be discussed at a forum with Deputy Prime Minister Gaspar Vega, who has responsibility for fisheries, at the end of the month, when, he said, they should have an opportunity to make their presentation to the Minister.

McKenzie said that when bottom trawling was banned in December 2010, after an Oceana campaign, some people lost their livelihoods. He did concede that when it comes to gill net fishing, “the negatives outweigh the positives,” but added that since it’s a “bread and butter issue,” care has to be taken with how any regulated changes in gear use is implemented, and they must ensure that fishers are supported with alternative ways of making their money. McKenzie argues, though, that long lines have far less impact than gill nets do.

Wade said that Oceana has been talking with the Minister responsible for fisheries, as well as the Chief Executive Officer, about the gill net issue. She said that the Government is open to any constructive dialogue, but this is not about them getting up one day and deciding to ban gill nets without consulting people who would be impacted.

This year the Fisheries Department is moving to end open access to fisheries with a managed access regime that is accompanied by a new licensing framework which requires fishers to keep logbooks of their catch, and which specifies the locations they are permitted to fish, based on their traditional use of particular fishing grounds.

Wade conceded that “…if you’re now putting in measures geared at sustainability, we have to look at the issue of gill net.”

She told us that the Fisheries Department had activated the National Shark Task Force, which is charged with providing the Government with the best scientific advice on the future management, conservation and exploration of sharks in Belize. That task force, she said, is comprised of both local and international expertise, such as shark researcher, Dr. Damian Chapman from the University, of Stony Brook in New York, and MarAlliance executive director, Dr. Rachel Graham, whose research also looks at sharks in Belize.

Graham says that they don’t have “a beef” with the fishers. They are merely putting the spotlight on the issue to raise the question of whether the practices in Belize’s shark fishery are correct to ensure sustainability.

“I want to make it extremely clear, Adele. We are not shark huggers. We want sustainable fisheries,” Graham said.

MarAlliance’s petition calling on the government to ban the use of “nets and long lines” had over 1,600 supporters at the time of this report.