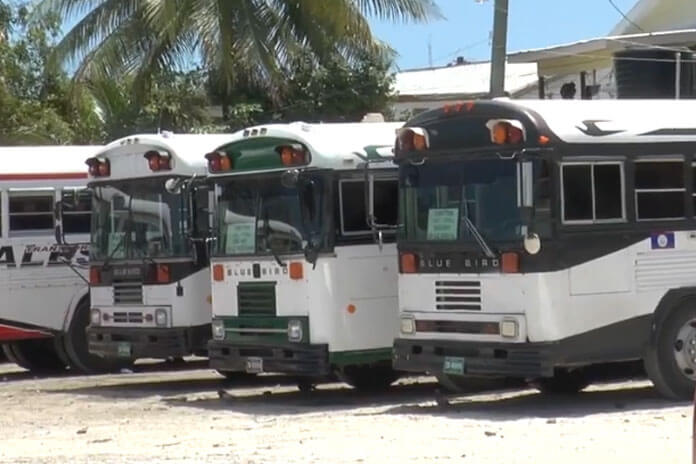 BELIZE CITY, Wed. Mar. 25, 2020– In the wake of social distancing guidelines set by government, which include a rule that prohibited more than 25 persons from congregating in an area at any one time (the maximum number of persons has been reduced further to 10) in an effort to combat the spread of COVID 19, some bus owners yesterday announced that they have suspended their runs to and from Belize City.

The bus owners said that they were helping in combating the spread of the virus.

During a press conference held today, Wednesday, the Prime Minister told the media that the bus owners were not able to generate any profits while limiting the number of passengers per trip to 25, and that the Transport Department was meeting with the bus owners in an effort to reach a compromise.

The suspension of the runs was done suddenly by the bus lines, and it took passengers by surprise. A meeting was held yesterday with the president of the Belize Bus Association and officials to iron out the problem.

The president of the association, Thomas Shaw, said that bus owners suspended the runs without consulting the Department of Transport. He has contacted the bus owners and they are to provide him with a schedule which will be workable.

The country is not under lockdown, and people need to travel, Shaw said. He suggested to the owners that if they have 6 runs, they can cut it to 3, adding that he is aware that they are not currently making money.

A large bus operator, however, said that his company was not going to run.

The Department of Transport has already identified bus owners who are willing to work in the interim, to alleviate the situation.

Currently, there is a bit of uncertainty about how the situation can be resolved in light of the new social distancing guidelines. It is being suggested that the bus operators might be exempted from some of these rules and might be allowed to fully utilize the seating capacity of the buses. If the bus has a seating capacity for 60 persons, then 60 persons can be transported, but no extra passengers and no standees would be permitted.

This will need to be clarified, said the Commissioner of Transport, Tirso Galvez, since the social distancing guidelines now permit no more than 10 persons to gather in any one place in the country. Galvez calls on passengers to be responsible. If they feel sick or are suffering with any underlying medical condition, they should protect themselves and avoid using the bus.

The Department of Transport further dictates that when a bus arrives at a terminal, all the passengers should disembark and the bus should be sanitized. The passengers must now wash and sanitize their hands when boarding the bus before it departs from the terminal.

Galvez said that the bus owners will monitor their buses, and if there are not enough passengers to warrant the run, then it will be delayed.

In talking about the “busitos” and “dalla vans,” Galvez said that the same rules apply to these forms of public transport. He said that some of the busito owners have installed extra seats in the aisles to increase their capacity, but that the Transport Department is aware of this and is monitoring the situation.

He also clarifies to the busito owners that the rule prohibiting no more than 10 persons to gather in any place does not apply to transportation. However, he calls on them to sanitize their vehicles before they allow passengers onto them.

Westline Bus Service has not suspended its service or schedule, which can be found on its website. The schedules put out by the buses are flexible, and the runs may proceed or be delayed depending on the number of passengers traveling.

The bus schedules can be seen at all bus terminals, and they can be seen online and on the Government of Belize Press Office’s Facebook page.