Home Features Despite spike in homicides for January, Belize can become a safer place...
Features

Despite spike in homicides for January, Belize can become a safer place in 2016 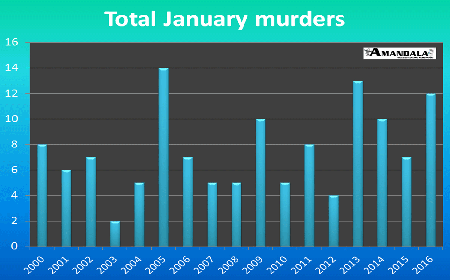 BELIZE CITY, Wed. Feb. 2, 2016–With 12 murders reported by the Police Department for the month of January 2016, including the stabbing murder of Mariano Castillo reported over the weekend, the year is off to a very bad start. In fact, the month’s murder tally is the third highest ever recorded in Belize for that specific month.

Although January 2005 saw a record 14 murders, the year 2005 saw far less murders than had been reported in Belize over the past 10 years, with a total tally of 81. This makes the point that a bad start to the year does not have to equate with a bad finish.

When 13 murders were reported in January 2013, the year finished with 99, breaking the triple-digit trend which began in 2010. The year before, 2012, had actually seen a record-high 145 homicides—but only 4 of those had occurred in January.

While the statistics give us reason to hope that the murder rate does not have to reach triple-digit figures again this year, Monday’s broad daylight double murder in Orange Walk Town underscores the fact that only effective interventions can curb what is undoubtedly an unwelcome crime wave in Belize.

Our review of the data since 2000 reveals that over 1,500 murders have occurred since. The year with the lowest number of January murders was 2003, when only two murders were recorded. That year, 67 murders were reported in Belize.

Belize’s sad reality is that today, in 2016, the homicide count is more than two and a half times what it was back in 2000, when only 47 murders were reported.

Undoubtedly, Belize has become more violent. In the wake of the grisly murder of Canadian filmmaker, Matthew Klinck in western Belize in early January, Canadian authorities advise their nationals to “exercise a high degree of caution due to a high rate of violent crime throughout the country”—not good for our image as a prime tourist destination. So, it is time for a concerted national effort to make Belize a safer place.