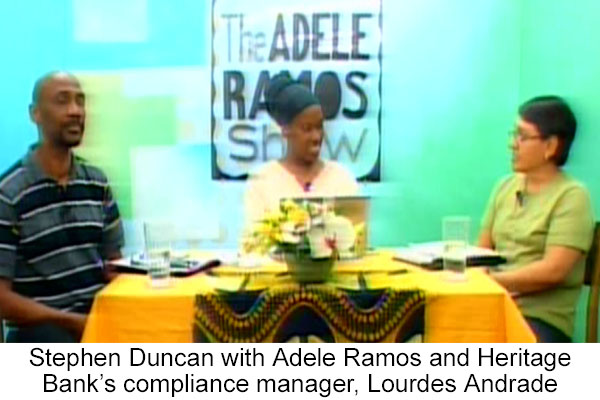 It’s been years since the Integrity Commission has been active, and one was finally appointed by the Senate last week, but the Office of the Prime Minister announced on Monday that two of the appointees – Belize City banker Stephen Duncan and businessman Brett Feinstein – had declined their appointments because the recent passage of legislation to ensure compliance with the Financial Action Task Force (FATF) would mean that they would be regarded as Politically Exposed Persons (PEPs) and would, consequently, be subject to “onerous disclosure obligations.”

Speaking on The Adele Ramos Show on KREM Tuesday night, Duncan, the managing director of Heritage Bank, said that while he agrees that the Integrity Commission needs to be revived, and he would have been very honored to serve, the overriding factor for declining the appointment is that although he is not a politician, as a member of the Commission, he would be required to make a public declaration, as well.

Duncan said that he would have been faced with a situation where in today’s environment, the information would become public and would be seen not only by people with good intentions.

“You hear of home invasions now, you hear of armed robberies, kidnappings, so I decided you make a public declaration and somebody feels that the two pennies you have is more than what they have and they feel that that’s a good target. You might not be rich, but you might have more than somebody else,” Duncan said.

“I think from that perspective, I chose to be careful in terms of dealing with it,” he said.

On Monday, the Office of the Prime Minister (OPM) announced, “with regret,” that two of the persons designated by the Senate Resolution last Thursday to be members of the Integrity Commission, have indicated that they cannot accept the appointment.

This follows upon passage into law of the Bills designed to ensure compliance with the requirements of the Financial Action Task Force, which was necessary to avoid the international blacklisting of Belize’s financial sector.

The Bills, now Acts of Parliament, contain wide-ranging definitions of Politically Exposed Persons (PEPS). Onerous disclosure obligations are visited upon PEPS, their family, friends and associates. It is because members of the Integrity Commission are now likely to be considered PEPS that the two withdrawals have come.

Government will therefore have to begin anew the search for persons prepared to serve, notwithstanding the PEP classification, and hopes that the exercise can be concluded within a reasonable time.