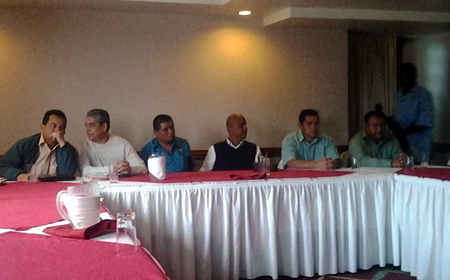 BELIZE CITY–As we have extensively reported for some time now, the future of the sugar industry has been threatened by an ongoing stalemate between the local cane farmers’ association and the owners of the sugar mill, but today, Friday, after a meeting between representatives of the Belize Sugar Cane Farmers Association (BSCFA), the Sugar Industry Control Board (SICB), the Ministry of Agriculture, and Prime Minister Dean Barrow, the volatile situation has seemingly inched one step closer to being a thing of the past.

The meeting took place at 10:00 this morning at the Belize Biltmore Plaza Hotel in Belize City, and at the end of that session, an hour and a half later, the lingering press was invited into the room to hear optimistic news for the critical national industry.

Prime Minister Dean Barrow, who had taken on a temporary role as mediator in the deadlock prior to the last sugar crop season, informed us that the BSCFA has a new modified position which, he feels, presents the best chance for both parties to reach middle ground, although neither Barrow nor the principals of the BSCFA would divulge any of the details of the new proposal.

Barrow said, “Government congratulates the BSCFA on the position that has now emerged, which, in our view, represents a fair and indeed, compelling basis on which negotiations can now take place. The position that has emerged represents perhaps — and I want to choose my words carefully — a refining of what still remains, the core stance of the BSCFA, but in an effort to move the process forward, the BSCFA has introduced some modifications into their core position, [and] the outcome of this meeting is such that I will immediately thereafter, get in touch with BSI/ASR and invite them to agree to the actual date for the resumption of negotiations.”

New chairman of the BSCFA Committee of Management, Ezekiel Cansino, treaded softly around the fragile issue when explaining the BSCFA’s new approach.

“The position of the BSCFA has been one that the cane farmers have given us the mandate to start the crop with an interim agreement, but the time is closing out for the start of a crop and we, as usual, have been flexible in the negotiations. So here we are today with the Prime Minister, assuring him that BSCFA is being once again flexible and reasonable, and asking his intervention to help us to bring back BSI/ASR to the negotiating table. This is, we feel, the best that can happen to the industry, since we have an overproduction this year and our cane farmers cannot afford to lose any of that production”, he mentioned.

PM Barrow informed the media that this past Monday, November 24, he met with affiliates of the BSI/ASR group, and it was agreed that depending on the outcome of today’s meeting, GOB would have put things in place to compel a return to the negotiating table; however, that is no longer necessary since he, Barrow, is not just satisfied, but gratified by the way the BSCFA is handling the issue.

“I have no doubt that the BSCFA position is a fair one that not only seeks to protect the interests of the cane farmers, but seeks at the same time to be able to compromise with ASR [American Sugar Refineries] so that the crop and the industry can go forward. If this is matched on the part of ASR/BSI [Belize Sugar Industries], we should be able to reach agreement”, he said, as he commended the BSCFA for the modification of their core position.

We understand that the BSCFA has, up to this point, remained relatively steadfast on two of the five primary issues for which it has clamored in its negotiations with the multinational, including cane ownership and the formula for payment of bagasse.

The association has claimed that they want to start the crop with an interim one-year agreement, after which talks can be entertained with regards to those particular issues.
PM Barrow told us that he will now meet again with BSI/ASR to hopefully reach a final solution, as he indicated that the sugar industry is too important to Belize’s economy to let such a volatile situation continue for two successive years.

It is expected that after the BSCFA’s current position is communicated to BSI/ASR, a definitive start date for the 2014/2015 sugar cane crop season will be pinpointed, but for now, the tentative date has been December 8, 2014.

The cane farmers’ association and BSI/ASR are expected to meet again early next week, but so far, no firm date has been set for the meeting.