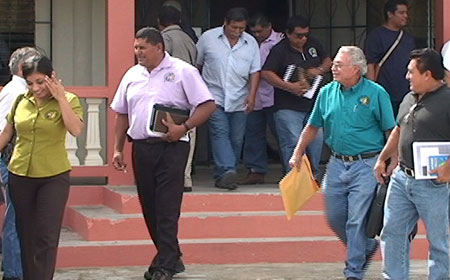 ORANGE WALK–A daunting stalemate continues to overshadow the future of the sugar industry of Belize since the two main stakeholders, the Belize Sugar Cane Farmers Association (BSCFA), and the Belize Sugar Industries (BSI), alongside its parent company, American Sugar Refineries (ASR), have locked horns and stuck to their respective positions as they each seek to get their preferred terms embedded in a new sugar cane purchase agreement between producer and miller.

The parties sat at the negotiating table for another round of discussions yesterday, Thursday, October 9, and during that meeting, members of both entities met to review the BSCFA’s draft counterproposal to BSI/ASR’s newly-proposed commercial agreement, which was presented to the executives of the cane farmers’ association a little over a month ago, on September 8 — the date the two entities last met.

BSI/ASR is maintaining its position that the company is intent on hammering out the details of the new agreement by the time the next crop season begins in the next six weeks, since, according to BSI’s Financial Controller, Belizario Carballo Jr., they (BSI/ASR) prefer to conclude negotiations once and for all, rather than to enter into an interim agreement, such as the one that was signed prior to the commencement of the last sugar cane crop season.

He said, “Last crop, we saw the average grinding rate going up by 20% from an average of 6,000 before per day, to 7,300 tons cane per day, and those investments have been made, and the benefits of them have been proven. Those benefits flow directly to farmers because 65% of the net revenue from sugar cane sales goes directly to farmers, and so BSI makes investments and recovers 35% of the benefit. We are now looking at a situation where we have a capacity of 1.3 million tons of cane to mill in a 26-week period of crop, and we are hearing that there is perhaps more than that out there in the field, that there may be 1.4 million or 1.5 million tons of cane for the next crop, so whatever that figure is, we are already seeing a situation where cane supply is approaching the milling capacity, and that means that more investments will need to be made. We estimate that investment to be close to BZ$300 million dollars that is required to achieve an increase in capacity to 1.8 to 2 million tons of cane. That is the vision that we have, and that is the vision that we remain with, but to make that happen, investments must be made, and those investments can only be made if there is a climate for those investments to be made — political, economic, and in terms of economic, it starts with a good, clear commercial agreement between BSI and the cane farmers.”

He also declared that the sugar milling company remains rooted in its position that it has presented a fair proposal to the farmers, and recalled that the two sides spent more time in the negotiations focusing on the infamous bagasse issue than the actual purchasing agreement.

Meanwhile, Vice Chair of the BSCFA Committee of Management, Alfredo Ortega, told the media that they are disappointed at the way in which BSI was quick to disapprove of the BSCFA’s counterproposal, and made it clear that the association cannot simply just accept BSI’s proposed formula, while citing that they (BSI/ASR) are “singing the same old tune and almost starting to sound like a scratched record.”

“When they made their presentation today based on the counterproposal we sent to them, there were many things they were not in agreement with, and this clearly demonstrates that they are looking forward to impose the presentation that they gave us during the last meeting we had in which it clearly demonstrates that it is a 75/25 deal — 75 inclined to their benefit and 25 inclined to the farmers, and really we are looking forward to a 50/50 situation that will bring benefit to both parties within the industry,” he went on to say, adding, “They want to impose on us to accept their formula in which they are using the price of sugar cane as the example — they told us that they used it to come up with the 51 cents payment, and even though today they said clearly that that is an example, we did not accept the proposal. They are using a tier formula with the price per ton of cane which was paid to the farmers, but we are telling them to use the [price of] electricity because that is where the bagasse is being used as bio fuel. We are seeing now that around the world, they are looking forward to constructing more plants such as BELCOGEN because that seems to be the future in sugarcane because that has a strong market versus the sugar, because the sugar as you know, is volatile.”

Ortega further explained, “Presently, we are seeing that [world] prices are going down and that there will be a change in the regime in the EU market for 2017. One of the situations that is giving us a little leverage is the contract that they have of 425 Euros per ton of sugar which will come to an end next year in 2015. So what will happen after that? They rightly said it today; we don’t know what will happen after that, so we cannot accept that they will use a formula based on the price of sugar when they are using the bagasse as fuel in order to sell electricity to the national grid, so we are simply asking from them to use the price of electricity so that you can come up with a better figure on what you are showing to us, but it seems to be that all they want to do is to impose on us and for us to accept what they are presenting to us, and we cannot go with that. If we are to work as what they say, as a couple that cannot afford a divorce, they must realize that we are living in new eras. They want to come and act as though we are living in the old days where the man comes and beats his wife, and half an hour later, he comes and asks for food and she gives it to him and everything. No, man, we are in a different period of time, so if they are looking forward as they say for the farmers to benefit, let them come clear and let the agreement be just the way it should be.”

So, while the indications at this point are that history might repeat itself for a second consecutive year even though both parties agree that reaching an agreement is very crucial considering the approach of the start of the new crop season, the reality is that neither side is closer to an agreement than they were at the start of their last meeting.

In relating the company’s side of the story, Carballo explained that in the draft agreement presented to the farmers, BSI committed to give the farmers 65% of the net revenue from the sale of sugar and molasses, which he described as one of the “most favorable” formulas in the world.

He said, “There are some very fundamental points that we are still at odds on. One of them is the bagasse issue for which we have presented a formula and we are firm in terms of what we have committed to do in respect to a payment for bagasse. We have presented a formula which we feel is fair, reasonable and equitable considering that BELCOGEN, which is the investment that is generating the interest in a payment, is yet to make a profit, and that is our fundamental point. BELCOGEN is an investment from BSI, and BSI as the investor is yet to recover one cent from that investment. We are offering to make a payment for bagasse to farmers starting from next crop if the agreement is concluded, but it has to be in context of investments, and an ability for the investors to recover their investments before there can be any talk about sharing.”

Investments aside, the BSCFA believes that it is all about a level playing field.

“As an organization, we have grown and we clearly know that if the farmer does not deliver his cane, he is not making money, so we clearly understand the issue in regards to delivering our cane. What we are looking forward is a mutual understanding on both sides, but we are seeing clearly that they are looking forward to only what will give benefit to them, rather than giving benefit to the industry, because once the farmers get a substantial economic benefit, it is the country of Belize that will gain”, Alfredo Ortega emphasized.

Ortega added that the BSCFA will convene meetings first at the branch level, and then within the general membership to chart their course forward.

An eerily similar impasse, compounded by other unfavorable conditions, such as bad weather and impassable cane roads, hindered the timely commencement of the 2013-2014 sugar crop season, which did not start until January of this year, as opposed to its projected November 2013 start date, resulting in an estimated $10 million dollars in losses for the industry.