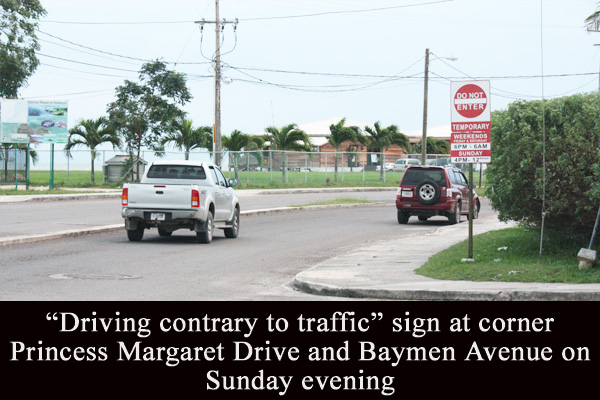 “Time haad out ya.” There are a host of other things I would desperately prefer to do with my hard earned $50.00, than what I just did. The law is the law; and I am a law abiding citizen. At least I try to be.

They say, “Ignorance of the law is no excuse.” I broke the law on Sunday afternoon; and today I paid the painful price for it.

But I did not do it deliberately. I didn’t, as some would say, try to take a chance, and got caught. No, I was innocently doing what I thought was right.

Just about every driver in Belize City, I suspect, knows that from 6:00 p.m. on Friday evening until Monday, you cannot drive down Princess Margaret Drive from its junction with Baymen Avenue going south towards the MCC Grounds and its junction with Calle Al Mar.

I thought I knew the law. Do you?

There was very little traffic on Sunday afternoon when I travelled that route towards the MCC. There used to be a warning barrier halfway across the street to remind drivers of the weekend one-way traffic; not so anymore. Before I reached MCC, in front of the Princess fence, three traffic officers had a check-point going, so I dutifully pulled out my driver’s license. But the officer said there was another problem. I was guilty of a traffic violation – “driving contrary to traffic on a one-way street.”

“You’re still in violation,” the officer insisted. “Check the sign. It says one-way traffic from 4:00 p.m. on Sundays.”

“What!?” I was dumbfounded and angry. “Since when?”

“That has been the rule for years,” the officer insisted.

As the officer proceeded to write up my ticket, I thought to myself, “How could this have been the law all these years, and I didn’t know.” I always thought it was from 6:00 p.m. that the one-way traffic came into effect.

There were a couple other drivers in the same predicament as myself, so it seems that there are still drivers out there who are unaware that on Sundays it is 4:00 p.m., not 6:00 p.m. as on Fridays and Saturdays, that the one-way traffic begins on this stretch of Princess Margaret Drive.

I wonder how much money the City Council has collected from drivers like myself, who were ignorant of this rule?

I am not happy. In fact, I am angry about this. $50.00 is a lot of bread “eena dehn haad time ya.” It felt like somebody had set a trap to catch me. And there is no winning the case.

After receiving the ticket, I drove back to the junction of Princess Margaret Drive and Baymen Avenue to inspect the sign which I had not even noticed when passing. Sure enough, it said “DO NOT ENTER. TEMPORARY – WEEKENDS – FRIDAY & SATURDAY – 6 PM – 6 AM; SUNDAY – 4 PM – 12 Midnight.”

I was still angry; perhaps with myself a little bit. How could I have overlooked that “4 PM” bit all these years? I wonder how many other drivers are aware of that, until they get caught like me; and why didn’t they set the “trap” in front of the Fisheries compound instead, and capture the many Tavern visitors that I saw in violation also?

Fellow drivers, beware; our Mayor’s traffic officers are under strict instructions – no warnings for first time offenders. It’s a $50.00 ticket now. And, “If the fine is not paid within fifteen (15) calendar days you will be charged an additional fine of $5.00 for every day the fine remains unpaid.”