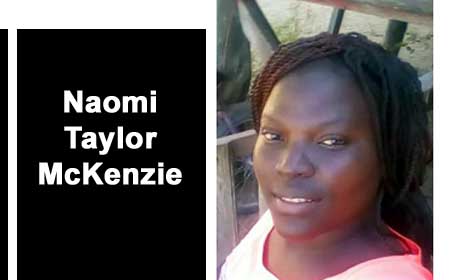 DANGRIGA, Thurs. June 15, 2017–A 26-year-old teacher of Wagierale, Naomi Taylor McKenzie, died after she was knocked down on Ecumenical Drive by a motorcycle while riding home after school on her bicycle at about 4:30 this evening.

Police said that the motorcycle was being driven at the time by Michael Estero, 22, who had a passenger, Calvin Williams, 17, both of Dangriga. The motorcycle collided with the back of the bicycle, and McKenzie was thrown of the bicycle and landed on the pavement. She suffered massive head and body injuries, and died on the scene.

Also as a result of the accident, both men were injured and were taken to the hospital in Dangriga, after which Williams was transferred to the Karl Heusner Memorial Hospital for further treatment.

Naomi McKenzie was a pre-school teacher at the Kids First Preschool in Dangriga, and was a student of the Ecumenical College Evening Division.