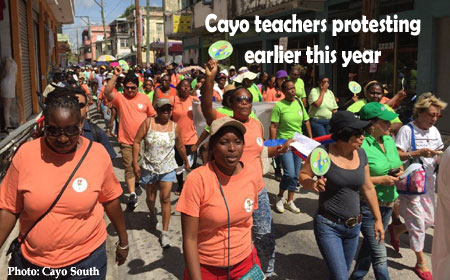 BELIZE CITY, Mon. Sept. 12, 2016–Teachers met at an emergency meeting last Thursday to consider what actions should be taken to press the Barrow administration on key demands they have put on the table, including their insistence that the Government should not defer their 3% salary adjustment until next April and their push for a Senate inquiry into the recently unveiled Immigration audits.

Although no official statement has been released by the Belize National Teachers’ Union (BNTU), Amandala is reliably informed that a letter is being dispatched to Prime Minister Dean Barrow, and if the demands that the teachers have put on the table are not met by Friday, the teachers are likely to stage a demonstration early next week.

If their demands are not met by Friday, the teachers may stage a demonstration early next week

Last Friday, Prime Minister Dean Barrow told the press, “I can’t for the life of me fathom how it is the BNTU could be talking about industrial action! There is no dispute!”

“Government did not say we are not going to pay you. We made a request that they consider, in view of the hurricane [Earl], a deferral of the salary adjustment. The amount had already been agreed,” Barrow indicated. 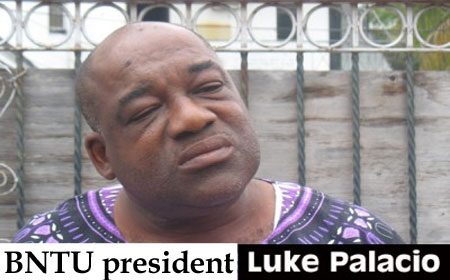 He said that the three unions, the BNTU, the Public Service Union (PSU) and the Association of Public Service Senior Managers (APSSM), undertook to consult with their membership and to come back to him with an answer. We understand that a letter stating the position of the unions, with the PSU and APSSM, agreeing with the Prime Minister’s proposal, but the BNTU disagreeing, is also being dispatched to the PM.

At last Thursday’s meeting, key BNTU branches voted overwhelmingly in support of industrial action, but they have made it clear that their disquiet is not just about the salary issue. Although the BNTU stands alone among the unions representing teachers and public officers in turning down Barrow’s proposal for a deferred salary adjustment, they seem to also be the most militant on the issues of the day, primarily the demand for a Senate inquiry.

Prime Minister Barrow has been adamant that he is opposed to an inquiry chaired by private sector senator, Mark Lizarraga. He has suggested that the senator for the trade unions, BNTU stalwart Elena Smith, should get ready to lead the inquiry. At the time he made the statement, Barrow was fixed on the bi-cameral committee of the House and the Senate.

When Cabinet meets tomorrow, it may reconsider the Government’s position to push for a bi-cameral inquiry by members drawn from both the House of Representatives and the Senate, and abandon that in favor of the Senate inquiry, which has strong support from both the unions and the private sector.

The Chamber has written Prime Minister Barrow, indicating that based on legal advice they have received, the bi-cameral investigative body proposed by Barrow to investigate the Auditor General’s report on Immigration would violate the Constitution, and if the investigative process is found to be unlawful, the entire process would be a waste of time and resources. Like the teachers, the Chamber has reaffirmed that the investigation should be conducted by the Senate.

There are other demands from the teachers, though. We understand that they include the appointment of the 13th senator; an international inquiry into the murder and beheading of Pastor Llewellyn Lucas, a former trade union activist and politician; an amendment to the Social Security Act to cover accidental injury of teachers to and from work; as well as the removal of Immigration Minister, Senator Godwin Hulse, from the investigative process into the Immigration audits.

The teachers are also calling for the Government’s accession to the anti-corruption convention, known as the United Nations Convention, Against Corruption.

Belize is one of few countries in the world which have not signed on to the international convention, but a few weeks ago, Prime Minister Barrow publicly agreed to signing on to the convention, after reportedly agreeing to do so at a recent meeting with the Chamber.