Teachers step up “locomotion” to march on Belmopan! 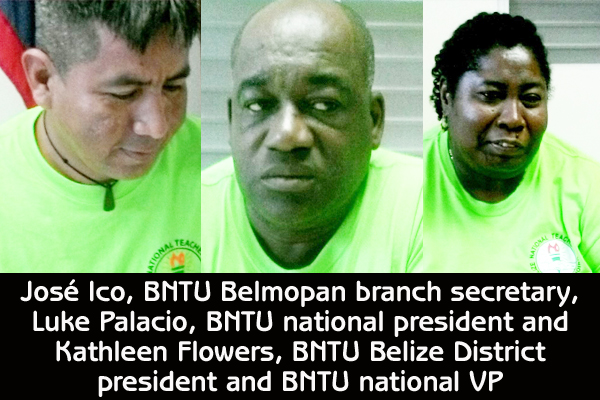 “This is not about bringing down a government…” says Kathleen Flowers, BNTU 2nd national VP

The Belize National Teachers Union (BNTU)—which represents 3,000-plus teachers nationally—called a press conference today to report that between 85% and 95% of members from the various branches came out in the month of January to support the series of rallies which began in Orange Walk and culminated in Punta Gorda last Friday.

For the BNTU, that is a measure of success, but they told the media that they are not stopping at that.

Palacio said that they are calling on every single person to remain focused and act in a peaceful and responsible manner, as they express their love for Belize through activism.

“This is our country and if we love our country, we are not going to destroy it,” Palacio urged.

“We are not quarrelling!” said Kathleen Flowers, BNTU National’s 2nd vice president and the president of the BNTU’s Belize District Branch.

Flowers said that as teachers, it is their job to call Belizeans to wake up, and they “will continue this locomotion…,” leading to the reading of the national budget, likely to occur in March.

Flowers said that in March, the BNTU will “March on!” on Belmopan, if the headline issues are not progressively tackled by the Government of Belize.

“This is not about bringing down a government,” Flowers added.

She said that what they are doing is also for the benefit of the general population and citizenry of Belize.

Today, the union also highlighted among the frontline national concerns the “corruption tidal wave,” which they said “just keeps coming” – such as the recent controversy surrounding the Belize Airport Authority (BAA) and the payment of a series of checks to Minister of State Edmund Castro. The Government last week forced the resignation of the BAA board and has removed the BAA from under Castro’s authority.

Other issues listed by the BNTU – which were also raised at the recent rallies – include the Occupational Safety and Health Bill, Social Security reform and income tax reform.

José Ico, BNTU Belmopan branch secretary, said that teachers have traditionally fought and bargained for better, for social justice and a greater voice in decision-making, as well as for the sharing of the country’s wealth.

One central demand of the BNTU is for the Government to guarantee a floor for the salary adjustments which teachers and public servants have been agitating for.

In the House of Representatives last month, Minister of Education Patrick Faber said, though, that as a responsible government, they cannot make such a guarantee. Faber reiterated the Government’s offer to pay as a salary adjustment 50 cents on every dollar of additional revenue the Government receives in the 2013-2014 financial year, over the previous financial year.

“How can it be that a floor can be put anywhere if [the Government representatives] don’t know what will happen?” Faber questioned.

As for the national issues the BNTU has raised, Faber conceded: “Yes! Corruption exists—and you could quote me on that!”
Recently, Prime Minister and Minister of Finance Dean Barrow told Channel 5 that with the increments to be paid to workers, the salary adjustment would bring the teachers and public officers close to the 5% floor that they have been demanding.

“That increment has nothing to do with the salary adjustment. We have to say that over and over again!” Palacio rebutted today.

He said that salary adjustments, to buffer cost of living pressures, must not be confused with increments – which are based on worker performance. According to Palacio, the Public Service Regulations (2001) stipulates that an increment is given to persons based on performance, and some workers—such as open vote workers—do not get increments.

The Government has indicated that the salary adjustment would be paid in July, but the BNTU insisted today that they are still asking for that offer to be put in writing.

Otilio Muñoz, BNTU Orange Walk branch president, thanked all who participated and supported the teachers and retirees, as well as members of the wider community who supported the rallies held in January. Among them he mentioned their union comrades from sister organizations and the National Trade Union Congress of Belize, the Belize Chamber of Commerce and Industry, the Belize Sugar Cane Farmers Association, the Belize Territorial Volunteers, the Federation of Cruise Tourism Associations of Belize (FECTAB), and Citizens Organized for Liberty Through Action (COLA).

Flowers said that of the 23 proposals put on the table in negotiations between the unions and the Government, they have signed off on 8 and 2 more are being finalized. They are hoping to soon have a partial agreement with 3 to 4 more points being agreed upon, as negotiators are working to bring things to a level of closure.

She contends that the rallies by teachers amid those negotiations – another round of which was held last week – are not an act of bad faith, as there are national issues also on the front burner.

In fact, the BNTU is hoping to get the public onboard, and it will begin a green wristband campaign. The bands, which will be inscribed with the words, “Belize…Teechaz gat yuh bak… Join us!” will be one of the tokens available to those who will lend their support to the BNTU national campaign by joining the “fill the bottle drive!” In that drive, citizens and members would be asked to drop their dollar “if you believe in what you are doing…”