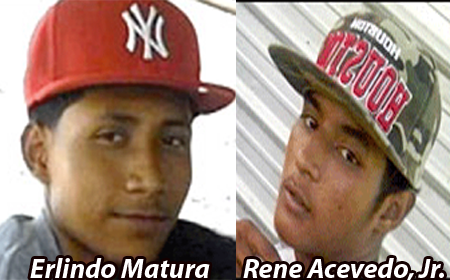 ORANGE WALK TOWN, Thurs. Feb. 4, 2016–Two Cristock Street, Orange Walk Town teenagers were shot and killed at about 4:30 Monday afternoon — their bodies left sprawled on the road in front of one of their homes.

Their friend, another minor, managed to escape the killer. Orange Walk police told Amandala today, Thursday, that they know who they are searching for, but have not found him yet.
Matura and Acevedo were transported to the Northern Regional Hospital, where they were pronounced dead on arrival.

The three friends were at Acevedo’s home, when a man rode up on a bicycle to the yard and called for Matura. Matura came out of the house onto the road to talk to the man. His two friends, Acevedo and the minor, followed him to see what the man wanted.

The man reportedly asked them who was selling weed in the area, and engaged them in a brief conversation.

Police say that the man moved about 15 feet from them, then took out a gun and shot Matura in the chest. Matura collapsed and Acevedo tried to run, but the gunman shot him in the back of the head, and he also fell.

The minor who was with them ran, and the gunman fired at him, but missed.

Witnesses told police that the gunman rode away and they chased him, but he was able to escape from them on his bicycle, and rode towards Yo Creek Village.

Matura’s mother told police that she was at home when she heard about four gunshots. She ran outside and saw her son lying on the road. He was bloody and had a gun injury, and was lying, face-up. He didn’t die immediately, she said, but took a breath, smiled and died in her arms.

The motive for the double murder is not yet known.