Home Headline Tension between the Bench and the Bar
Headline 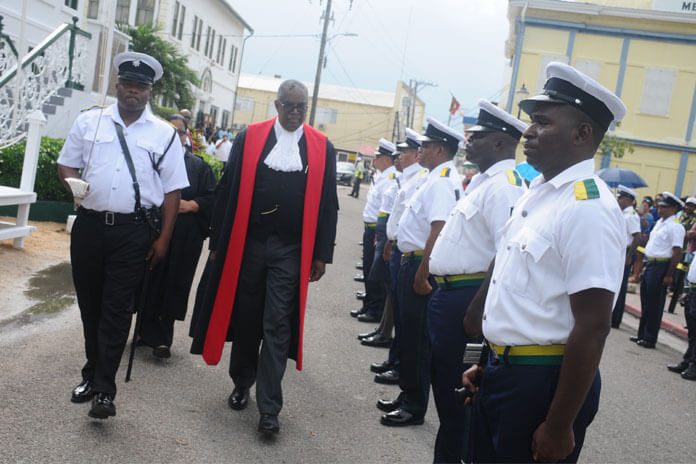 BELIZE CITY, Mon. Jan. 13, 2020– The traditional opening of the legal year is usually accompanied by pomp and circumstance. At today’s opening of the Supreme Court, there was the usual ecumenical service. This year’s service was at St. John’s Cathedral and the members of the Judiciary paraded from the church to the Supreme Court, where in front of the court building on Regent Street, Chief Justice Kenneth Benjamin inspected a Police Guard of Honor, comprised of officers from the police’s Special Patrol Unit.

Following the inspection of the guard of honor, those in attendance, which included members of the diplomatic corps, made their way into Chief Justice Benjamin’s courtroom to hear his report of the legal year that just ended.

For some time now, however, the Chief Justice has excluded the President of the Bar from the meetings of the JLSC.

This situation has resulted in the Bar Association filing a constitutional challenge to the decision of Chief Justice Benjamin to exclude Bar president Vidal from the JLSC meetings.

If this case is resolved in the Bar’s favor, the implication would be enormous and could affect all judicial appointments made during the more than one-year absence of the Bar president from JLSC meetings.

Last Friday, the Bar Association issued a statement to its members advancing the reasons that its executive members boycotted today’s opening ceremony.

The statement reads as follows: “Dear Members: As you are aware, the Association has commenced an action in the Supreme Court challenging the decision of the Judicial and Legal Services Commission, chaired by the Honourable Chief Justice, to exclude the Association from the Commission. A judge of the Supreme Court has, in open Court, when presiding in a completely unrelated matter, called this action “stupidness,” and made disparaging remarks about both the Association and its President, in particular.

“As you are also aware, the issue of the Chief Justice’s outstanding judgments remains live. Despite the best attempts of the Association, over a period of years, the Chief Justice still has judgments outstanding for over 4 years. The Executive, in consultation with other members of the Bar, has taken the decision to be a joint claimant in proceedings regarding the failure to deliver these judgments. This action should be filed shortly.

“Further to this, it has become apparent that several positions on the Supreme Court Bench will become vacant this year, three at least, within the first quarter. While this would have been foreseeable, no arrangements have, as we understand it, yet been put in place. The only suggestion that it seems has been put forward, is to extend the tenure of the Chief Justice.

“Given this state of affairs, the Executive and senior members of the Bar have taken the position that we should not participate along with the Judiciary at the opening of the Supreme Court set for this coming Monday, and that the President will not address the Court at the sitting, in the 5 minutes which is customarily offered.

“While we are not asking members to refrain from attending the proceedings, we are asking that in determining whether to attend, each member give due consideration to whether, in light of these issues, members of the Association should celebrate the opening of yet another legal year with the Judiciary, while matters remain unresolved, giving both the Judiciary and the public, the impression that the Bar is countenancing the current state of affairs.”

So while the Bar Association executive boycotted the ceremony, many of its members were present in court for the Chief Justice’s report on the judicial year that just ended.

In the first part of his report, Chief Justice Benjamin detailed the various appointments to the judiciary, which include three Supreme Court justices: Marilyn Williams, Colin Williams and Francis Cumberbatch.

Justice Shona Griffith has resigned from the Supreme Court to take up an appointment in Barbados.

Magistrate Michelle Trapp resigned earlier this year and BDF Captain Lionel Olivera, who was on secondment to the Magistracy, has returned to the BDF.

The Magistracy remains below the requirement, the Chief Justice said, as he appealed for people to take up these posts.

In addition, CJ Benjamin and Justice Courtenay Abel will reach the retirement age of 65 during the first quarter of this year.

In the Northern Session of the court, 23 cases were disposed of, while in Belmopan, 37 cases were finished, and there are 96 cases pending trial.

In Dangriga, 41 cases were concluded and 27 remain to be heard.

Justice Antoinette Moore, who was sitting in Belmopan, will be transferred to Dangriga, while Justice Francis Cumberbatch will move from Dangriga to Belmopan.

At the Belize Central Prison, there are 109 accused murderers who are on remand. There are 22 inmates who are charged with murder and have been in prison in excess of 4 years.

Under the new sentencing regime for murder, 25 convicted murderers who were serving life sentences have been re-sentenced. Seven prisoners are awaiting re-sentencing.

CJ Benjamin said a big thank you to the Government and people of the United States for their donation of a video link system that has been installed between the court and the prison at a cost of US$387,000.

This system will save a lot of money that would otherwise have been spent to transport prisoners, the Chief Justice said.

A high point during the last legal year was Belize’s hosting of the Caribbean Association of Judicial Officers (CAJO) which was held at the Best Western Biltmore Hotel over a two-day period and saw attendance in excess of over 230 persons.

CJ Benjamin said 2020 will be a challenging year for the Judiciary.