THE GOLDEN GLOVES of Father Ganey 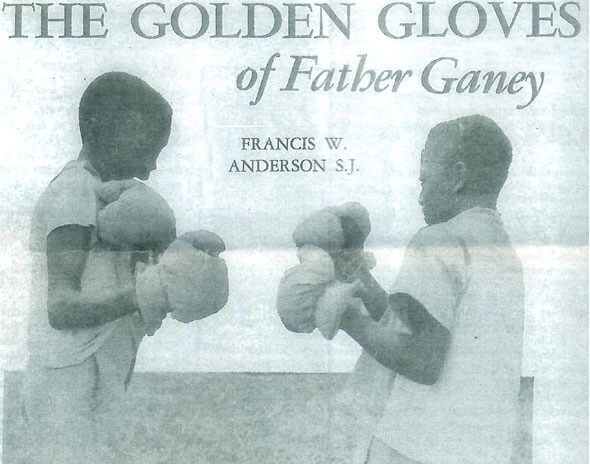 There is a long queue waiting outside Cathedral Hall in Belize. The tropical evening is abuzz with excited voices expressing the hope that there will still be room in the packed hall. The animated crowd is on hand to cheer their favorites in the number one sports event of British Honduras, – Father Ganey’s “Golden Gloves.”

I am sure that even if you are the most casual reader of the sports page, you will not confuse the Golden Gloves with the story of old King Midas and his golden touch. Especially in this year when newspapers across the country have been hailing the silver jubilee of the famous boxing tournament for America’s eager amateurs. The Golden Gloves has become one of the most popular programs of organized sport for American youth.

How Father Ganey imported such an institution into British Honduras is a story that reveals one of the less publicized phases of missionary activity. Missionaries have to assume many strange roles, as you probably know, in extending God’s kingdom on earth. But Father Ganey is in a class as a successful boxing promoter. Yet when it all began he scarcely knew the difference between a hook and a jab, let alone a counterpunch and a one-two.

Father Marion Ganey of Gillespie, Illinois, arrived in Belize fifteen years ago. He was a slim, quiet priest of studious mien, as befitted one fresh from his four-year course of dogmatic theology and that final year of Jesuit formation in ascetical theology, known as Tertianship. Belize was a far cry from his native Gillespie and from Saint Louis where he had studied and taught. He found it a steaming tropical town hacked out of a mangrove swamp on the edge of the Caribbean. Though it was the country’s capital, most of its 23,000 people were desperately poor.

As Father Ganey settled to work, his interests were directed into two fields – the problem of young boys with too little occupation and too much time for mischief, and the improvement of economic conditions among the distressed people.

He was aware that the learned volumes of the Summa Theologica, so recently his daily companions, did not contain the complete answer to his problems. Yet the Angelic Doctor had left him with a valid guiding principal, – “a certain modicum of physical wellbeing is wonderfully conducive to growth in spiritual stature.” That, in fact, is what started Father Ganey off as a successful boxing promoter and a champion of the underprivileged. For he understood, as all missionaries in depressed areas must, that effective preaching of the gospel means more than sermons and instructions. Surplice and stole are not enough. It has been so since Christ first preached in Galilee. If He taught the multitude, He also had compassion for their hunger and disease. So He fed them, as He also cured their ills.

The boys of Saint John’s College, where Father Ganey was stationed, were amply provided for. They had a well integrated sports program to fill their hours of leisure. So Father Ganey turned to the unorganized and unsupervised lads outside the school, the potential problem children. He saw the need of a Catholic Youth Organization after the pattern of the American CYO founded by Bishop Sheil in Chicago.

Wholesome supervised recreation was the first need. The formula was an athletic program that would get the lads off the streets quickly and permanently. Amateur boxing was the cornerstone of Bishop Sheil’s CYO. It corresponded to the need of the moment and to the limited financial and physical resources available. The success of the early boxing tournaments enabled the CYO to move on to a more comprehensive recreational and cultural program and such projects as the Sheil School of Social Studies. So Father Ganey set his sights on similar objectives.

From his Saint Louis days he knew the popular success of the annual Golden Gloves sponsored by the Globe-Democrat. So he wrote to the paper for suggestions and soon had complete instructions, detailing every item of the promotion and equipment. He found on the local scene a boxer of experience and took him and the Globe-Democrat letter as his guides.

But preparing for the first tournament involved expense and debt. The training of the youngsters had to be supervised, and this included diet as well as exercise; equipment had to be purchased; the ring constructed and other expenses covered. A neat promotional trick caused a great stir of public interest and guaranteed a house full of paying patrons. On the day before the first tournament, Father Ganey assembled his hundred eager contestants and led them in their robes and trunks on parade through the streets of Belize. The obvious fine condition of the boys, their alertness and new-found self-possession impressed the viewers. A fine crowd turned out for the tournament. Enthusiastic public support has made it a fixture. Last year’s tournament, with nearly 200 boys competing, required seven nights to run. More than a thousand fans overtaxed the hall’s capacity each night and hundreds were turned away. The Governor General of the Colony was present to distribute the prizes and praise the social contribution that Father Ganey had made.

The tournaments have been financially successful, so Father Ganey’s Catholic Youth Organization is on its way. Now he can give more time to his expanding Credit Unions and Farming Cooperatives. But they form another chapter in Father Ganey’s story.