Home Headline “They are trying to bury us alive!”
Headline

“They are trying to bury us alive!” 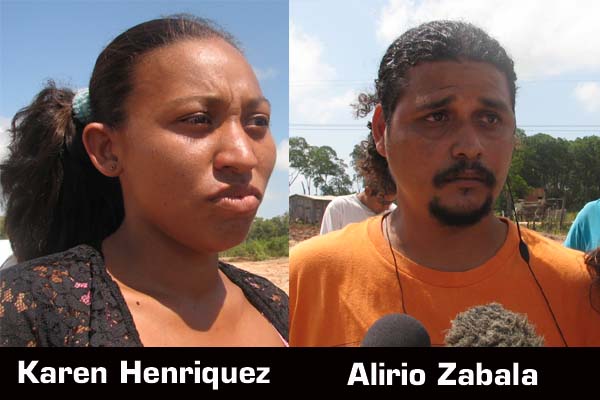 Lake-I residents clamor about Chetumal Street development project; fear that they will come home and find their homes “in pieces”

Lately it seems that there is hardly any infrastructural development project in Belize that isn’t faced with opposition or resentment from concerned or affected citizens who take it upon themselves to sound the alarm regarding some type of perceived injustice or the other, and today, another saga unfolded as some frantic residents of Lake Independence railed about proposed infrastructural works which, according to the residents, threaten to drive them from their residences, or as some said, “bury them alive.”

Their concerns stem from the Chetumal Street Bridge Project, which is currently taking place in the extended areas of Belize City’s Lake Independence constituency where a road is being constructed to bridge the north and south sides of the city in addition to infrastructure works to create a proposed bus terminal, a full-fledged police station and a multi-purpose sports facility in that vicinity.

Scores of persons reside on properties which are apparently in the way of the Chetumal Street Boulevard project.

The residents are now up in arms because they are claiming that they were previously promised that their homes and properties would not be affected.

Amandala spoke to some of the residents who told us that they are now in a state of worry because they are of the opinion that they were duped.

Alirio Zabala, who has been living in the area for the past 8 years, said, “We had a meeting with the man [Hon. Mark King] by the UDP headquarters and he told us that we were going to be relocated, and that’s what I’m waiting for, but nothing has happened yet. Now, I feel bad because I did a lot of investment in my land and when I go to work, I’m afraid that my house will be broken down. I have 3 kids and I don’t know where they will go if I don’t have a house.”

He said that he was trying to reach Lake Independence area representative, Hon. Mark King, to get some assistance with the situation, and even went to King’s office, where he was told by office personnel that nobody can move him.

Zabala, however, maintains that he is still fearful that he might go to work one day and come back to find the remnants of his house.

Zabala – who admitted that he is not in possession of the official documents for the land – emphasized that all he wants is to find out what will happen to his house, because he believes that after investing more than $7,000 in the property, he now has rights to the land.

Another resident, Karen Henriquez, who has lived in the area for 8 years, said, “We’re here to call the attention of the authorities or anyone who is willing to help us, because they are filling the land and they are coming closer and closer to our houses, and I feel that they are trying to bury us alive. No one came here to tell us that we have to move, but Mr. Mark King came here a couple months ago and he promised us that nothing will happen to our lands, but now they are clearing the land and they told us that we are in a bad spot.”

Henriquez then made a desperate plea to the authorities. She stated, “We are happy for the development, and it is good, but we want the authorities to just talk to us, because we come from another country, but we are not animals or monsters, so just tell us what is happening and we would be thankful if they offer us another piece of land.”

She also mentioned that she tried to contact King, but he was not in his office, so she plans to take the matter to the Lands Department.

Jorge Velasquez has been living there for 5 years. He stressed, “What’s happening here is that they are developing the place and filling up the land, but the people doing it did not say if they are going to relocate us and they haven’t given us a time to move or anything. About 2 months ago, they surveyed the land and told us that everything is all right, but it doesn’t look that way. Now they are just filling and not telling us anything. Only the workers told us that our houses are in the way and we will have to move, but they never said if we have 1 or 2 days or 6 months to move and if they will relocate us.”

He said that they are aware that it is the government’s land, but suggested that they be relocated to another area. “We understand that we need to move, but we need the support of the authorities so that we could know what to do,” said Velasquez.

Our attempts to get in contact with area representative King have so far been unsuccessful.

In March of 2011, when the road was initially being cleared, there was also an issue and public uproar when residents who were reportedly squatting in the area were forcibly removed by the police.