They’re in the starting gate; nominees for FFB elections on December 2

BELIZE CITY, Mon. Oct. 23, 2017–Today was the deadline for nominations to fill two posts in the executive of the Football Federation of Belize (FFB), namely President and Vice-President.

According to reliable sources, there are 4 nominees for President – Daniel Fabro, Sergio Chuc, Ruperto Vicente and Onan McLean; and for Vice-President – Frank Sharp, Carlos Galvez, and Cruz Gamez.

Unlike the Athletic Association, which just had an endorsement exercise on Saturday, after aspiring challengers found big hurdles in the nomination process, the FFB, under Acting-President Marlon Kuylen and newly appointed Interim-General Secretary Earl Jones, has apparently facilitated the process to accommodate a large field of candidates for the two available executive positions to be filled at elections scheduled to take place at its 11th Ordinary Congress on December 2 this year.

The two elected on December 2 along with the three incumbents – Vice-President Marlon Kuylen and Members Shane Orio and Darlene Vernon, will all serve the remaining two years of the current term, before new elections are held for all posts in another four-year term. 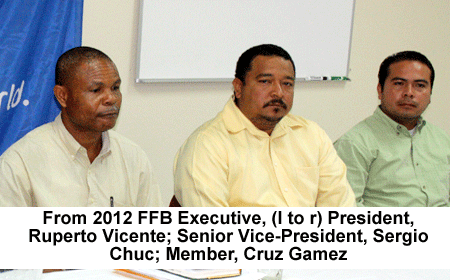 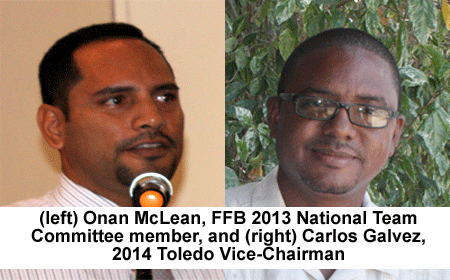 Fabro and Sharp, the only new faces in the race, are running together as a team, and presented their manifesto plans in a press conference a couple weeks ago. They received overwhelming fan support from callers when they appeared yesterday, Sunday, on the Press Cadogan Sports Show on Krem FM, where they pledged to dedicate major focus on youth football development, as well as a renewed line of communication with the public sector, both at home and abroad.

Twenty votes will decided the elections – 2 votes each for the 7 district associations (14 votes total) and 6 votes for the Premier League of Belize.