TOLEDO DISTRICT, Sun. Jan. 17, 2021– A man from Eldridgeville, Toledo, died over the weekend after colliding into a parked vehicle while travelling on a motorcycle. The deceased has been identified as Joshua Briceño, 32.

On Saturday, January 16, 2021, at about 10:30 a.m., David Linarez, 65, of Forest Home Village, Toledo, was travelling in his green Ford Ranger 2-door pickup truck along the Southern Highway in the village of Cattle Landing and was nearing an area between Miles 3 and 4 when he pulled over on the shoulder, and felt an object rear-end his vehicle.

According to police, Linarez exited the truck to make checks and found a black Sky-Go motorcycle with damages to the front portion and a man of East Indian descent lying in the middle of the road, bleeding from his head. The individual was later identified as Joshua Briceño. 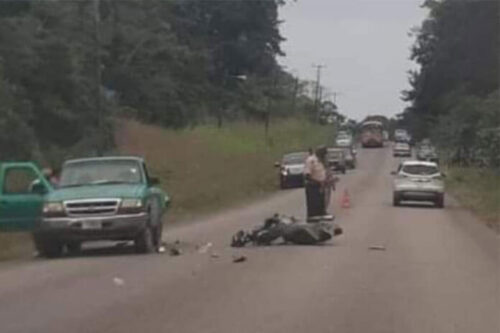 An ambulance arrived, and Briceño was transported to the Punta Gorda Hospital, where he succumbed to his injuries at 11:44 a.m.

Linarez was served with a notice of intended prosecution and might face investigation for manslaughter by negligence and other traffic-related offences.