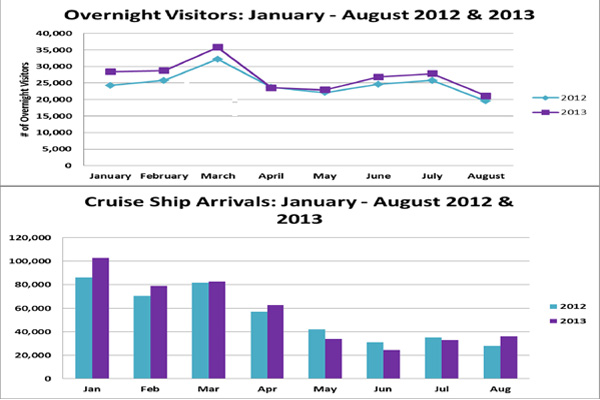 The August 2013 tourist statistics report issued by the Belize Tourism Board (BTB) points to positive growth in both tourism subsectors: overnight tourism and cruise tourism.

According to the BTB, the first 8 months of 2013 have recorded an 8.7% growth in overnight tourism and a 5.3% growth in cruise tourism.

“With these numbers, we are well on our way to making the 300,000 overnight visitors mark,” the BTB said.

In his 2013 budget presentation, Prime Minister Dean Barrow reported a growth of 10.2% in arrivals of overnight tourists for 2012, indicating that this year’s growth is lagging behind last year’s reported figure.

“The year 2013 started off with exceptional overnight arrivals. January, February, and March of this year saw 17.2%, 14.3%, and 13.0% increases, respectively, when compared to last year’s overnight arrivals,” the BTB reported.

It added, though, that growth in the last couple months has averaged at around 8%.

According to the BTB, 17,228 more visitors came to Belize during January and August 2013, when compared with the same period last year.

Meanwhile, cruise tourism recorded a 5.3% increase over last year – with outstanding growth in August making up for dismal figures between May and July.

“January 2013 saw an increase of 19.4% [in cruise tourism arrivals] compared to 2012. February, March, and April also saw encouraging increases. Cruise arrivals fell for May, June, and July, but made an outstanding recovery in August with a 30.2% increase over August 2012,” the BTB reported.

Of note is that border figures are still pending for July and August, and so the BTB promises to issue an update for the first three quarters of 2013 shortly.