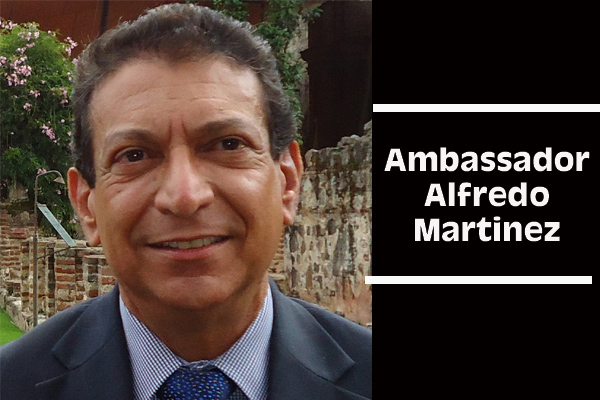 The once white marled and decrepit pavement, which serves as the only transit point for air arrivals to Orange Walk Town, was also renamed after one of the most prominent natives of “Sugar City”, former Mayor of Orange Walk, and the late Ambassador to Guatemala, Alfredo “Fred” Martinez.

Yesterday at the official ceremony, Minister of Tourism, Manuel Heredia Jr., in addressing the audience of government dignitaries, Belize Tourism Board (BTB) officials and members of the Belize Airports Authority (BAA), spoke about the airstrip and the fitting reason for its name change.

The airstrip was also re-named after the late Ambassador to Guatemala H.E. Fred Martinez

He said, “The Corozal airstrip was upgraded a few years ago and has since played a key role in the economic activity in Corozal. I am excited to say that with the inauguration of this new and improved airstrip, my government has directly invested over $1.2 million to enhance air connectivity and increase the capacity to gainfully accommodate arrivals in the respective communities here in the north of our beautiful jewel.”

“This airstrip will be renamed to suit the vigor, the dynamism, the humble eloquence and pride of Orange Walk. From this moment forward, this will be called the Alfredo Martinez Chan Pine Ridge Airstrip. This is in commemoration of the life of one of Orange Walk’s most astute and celebrated sons, and one of Belize’s renowned diplomatic giants. Ambassador Martinez relentlessly championed Belize’s sovereignty and economic independence, and for that, it shall remain forever indebted to his legacy and to his family who are here with us this morning”, Heredia announced.

Elodio Aragon, Jr., the UDP standard bearer for Orange Walk East, who also sits on the BAA Board of Directors, mentioned that since it has now been repaved with hot mix and painted to international standards, the airstrip will go a long way to improve the safety of all those who use it.

The physical layout comprises 2,300 feet of runway, and the project’s cost, as was mentioned, was over $1.2 million.

Since 2009, the Government of Belize (GOB) has been engaged in an airport development program of aerodromes countrywide.

To date, over BZ$6 million has reportedly been invested in the enhancement of airstrips across Belize.

The project was funded by GOB and the Belize Airports Authority.