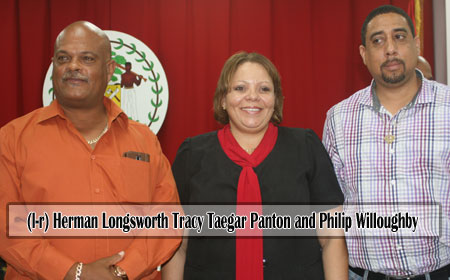 BELIZE CITY, Wed. Mar. 25, 2015–During a press conference that was held at the United Democratic Party (UDP) headquarters today, the leader, Prime Minister Dean Barrow, announced that he is in the process of fine-tuning his party machinery to be battle-ready for what he expects to be a hard-fought campaign leading up to the next general elections.

Part of those adjustments involved the replacement of current Albert division area representative, Hon. Herman Longsworth, with the outgoing Chief Executive Officer in the Ministry of Tourism, Culture and Civil Aviation, Tracy Taegar-Panton, a political newcomer who has functioned at the highest official level in the tourism sector for almost two decades.

The unexpected installation was confirmed today by Barrow, who described the well-known technocrat-turned-politician as “supremely qualified academically and professionally”, with a record of service that is “next to none”.

Although Taegar-Panton has never set foot in the political arena until now, she told the gathering that she feels that this is the time for her to throw her hat into the rough-and-tumble world of national electoral politics.

She said that even though her history shows a PUP background and a close working relationship with former PUP Albert area representative, now UDP insider, Mark Espat, her commitment is with the ruling party.

She said, “There is a history that I do have with the Mark Espat campaign, and there’s no secret about that. I have never shied away from that situation but not because of that, the assumption can be made that I am not committed to the UDP and the work that we will do in moving forward. I have always, been committed and involved in public service, and I feel that the time is right for me to take it to the next level and become more involved in political leadership and political involvement in Belize. I think it’s time for women’s voices to be heard, to be brought to the table, and to be able to make a difference not only for the people whom I live and work with, but also for the country of Belize.”

“As the UDP candidate for Albert, I bring to the table my professional and personal integrity, my passion, and absolute love for people, proven work ethic, vast experience, and a profound belief in Belize’s potential. Today, I commit myself to all voters, and let me reiterate…all voters of the Albert division. I pledge to listen to your concerns and to work hand-in-hand with you to meet the challenges and to embrace the opportunities of a division that continues to be transformed by this great United Democratic Party”, she went on to say.

During his parting shot, Longsworth – a businessman by profession – explained that his political career “was never meant to be permanent”, and that since the party has found someone “credible enough” to hold on to the mantle, he is “quite happy to step aside and go back to [his] business.”

Before the emergence of Taegar, however, Longsworth – the Minister of State in the Ministry of Education, Youth, and Sports – had been preparing to face a challenge from four-term Belize City councilor, Philip Willoughby, who had his eyes on the Albert seat for months.

That long-awaited convention, however, will not come to fruition, and Willoughby, who must now stand down, pledged to throw his support behind Taegar-Panton in her attempt to “deliver” Albert for the UDP in the next general elections.

Barrow, however, when prodded by the press, denied allegations that the two previous contenders were “pushed out” and that the move may have been “autocratic or dictatorial” on his part.

He later alluded, though, that both Longsworth and Willoughby stand to be rewarded for their “selflessness” at some point in the future.

For her part, Taegar-Panton mentioned that she has been on the ground in Albert since 1974, and that she is depending on the friendships and the relationships that she has cultivated over that time to give her the edge over her opponent, who worked with her at senior levels in the Mark Espat political machinery that racked up massive electoral victories in the Albert constituency between 1998 and 2008.

An endorsement convention is scheduled to be held in the coming weeks for Taegar-Panton, who joins Beverly Castillo, the UDP’s Belize Rural Central standard bearer, and Dr. Carla Barnett, who was recently endorsed as the UDP candidate in the Freetown area, as the party’s third female general election contestant.

Taegar-Panton is the daughter of the late Dr. Leroy Taegar, who offered himself as a candidate for the PUP in 1977 in the City Council elections.