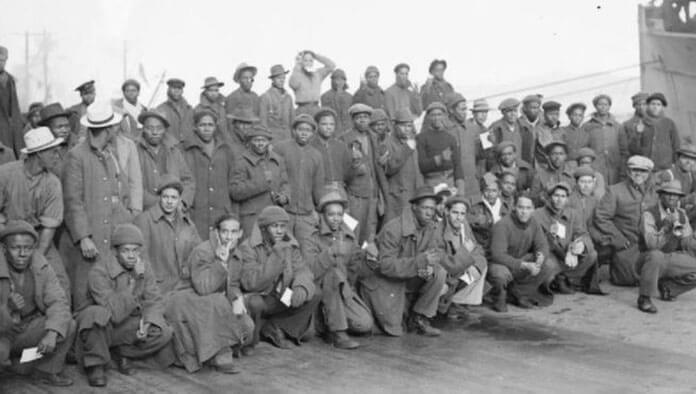 Who knows — one of these men here in this photo of Belizean men off to work in Scotland during WWII may have been a lost and never found uncle of mine, Hugh Smith, from the southern district of Stann Creek that left the former British Honduras, now Belize, by ship to work as a forestry worker in the 1940s.

My grandfather, Joseph “Jack” Smith, may have been one of my best history teachers to date, because his living with my mother, who was his caregiver until his death in Belize City, Belize, had transferred a body of knowledge to me that, despite all of my formal and advanced education that he had urged me to seek, cannot rival his amazing body of work, knowledge and wisdom. One of his sons,Hugh, whom he spoke about from the living room of our home so painfully and in tears, while he and my mother conversed, departed from Belize as a young man in his prime, never to be heard from and seen again.

Since Gramps’ passing in 1977 in Belize, the story of Hugh touched me as something that was deeply family-connected, and I wanted to bring some closure to it as a silent promise to my grandfather and a solemn one to my beloved mother. The search for Hugh was passed on to my mother, now 95-years old, who when she was in her 80s had urged me to at least find out whether her brother was dead or alive. In reflecting on it now, it appears that this lost prodigal son may never have returned after decades passed since the coming and the ending of the war.

It is quite obvious that he had died a long time ago, since he was my mother’s elder brother. And in my many searches to seek some closure for my mother and her Smith’s family clan that was so connected to Hugh Smith, the journalist in me sought but failed to produce any meaningful results. What came about were just the rumors that were fed first to my grandfather while he was alive — that Hugh had stayed on in Scotland, where he worked during the war and had a family there.

It was also revealed to Gramps and my mother that Hugh had married a Scottish woman and fathered some children. Sometime in 2000, the late Mr. Ernest Fuller, who knew my grandfather and Hugh, brought to my home in Belize City, Belize, a Reporter newspaper which contained a letter to the editor penned by one of Hugh Smith’s children, a daughter whom he may have fathered through his marriage in Scotland. She was inquiring about her aunt, my mother, whom she referred to, in her own words, as “my aunt Lydia Smith”. She stated in the newspaper letter that her father had mentioned about his little sister he left behind in Belize and how he promised that he would have taken care of her after he left Belize. It was assumed, then, that perhaps this young lady, who is an unknown cousin of mine in another land in Europe, may have wanted to fulfill her beloved father’s wishes and was reaching out to find her father’s family and her relatives in Belize.

There was absolutely nothing that really came out of it because the trail had run cold — since Hugh’s unknown daughter, known to us just by her last name “Smith”, never really responded back to my letter which was sent to the email address that she had left in the bottom signed part of her Reporter letter to the editor. Thereafter, my search had intensified after I was given this clue that mom’s dream to know whether her dearly beloved brother was out there and could be found may have been close to coming true. In reflecting on it, I think the newspaper letter writer may have built up my family’s hopes so as to break us down, as the saying goes. And it was also as if she had made my grandfather turn in his grave, so to speak. Hugh’s daughter never really alluded to the fact that her father was still alive in her letter.

My mother narrated to me that her brother Hugh left a failed marriage in Belize in the Stann Creek District, where he lived before going abroad. And she shared with me that he had solemnly made a promise to her that because he was deeply hurt from the separation, he would leave Belize and never come back. She expressed her love for her big brother, and even now as she ages, she is still asking me whether my continuous efforts to ask Belizean folks about it and to research it, whether my inquisitions had come up with anything about the niece that sought her identity as her aunt and about her brother. My unknown cousin’s naming of my mother in person was such a positive lead, as though her father Hugh had told her all about the relationship between his little sister and him. These cross-cultural and border connections are quite difficult to make, being that people on both sides of the divide are still strangers to one another.

In my discussions with my mother about the men like Hugh Smith who left Belize as British West Indian workers of World War II, and those who served as military men and others like Hugh who worked in the forestry regiments, she also mentioned another of her brothers, my uncle Fred “Freddy” Smith, who also volunteered to work abroad in Europe during the war as a British West Indian forestry worker. But it had appeared that Uncle Freddy and some other Belizean men who had also volunteered, came back home to Belize with their Scottish wives after their service in the war was completed. Mom remarked that the harsh, hot and humid climate of a developing British Honduras was so uncomfortable for these Caucasian women that the British colonial government had to send some of them back to Scotland. Mom also reiterated that some of these women were also not properly treated by some of these Belizean men who had faced severe hardships on their return, either through racism or other colonialist policies like those that had brought about the Ex-Servicemen Riot of 1919 in Belize Town.

Belizean men from the British West Indian Regiment like Samuel Haynes had returned from the racist battlefields of WWI to find that they were again unjustly mistreated by the British colonial government in Belize, which refused to compensate them justly for their service in the war. For those men like my Uncle Fred Smith, during WWII they appeared to have been mistreated in the same way abroad and returned to injustice in the 1950s that was similar to what Haynes and his comrades in British Honduras faced in the 1920s. According to my own mother’s account of her brother’s dilemma, his Scottish wife was sent back home to Scotland because he could not maintain her and their children properly.

The mosquito-infested living conditions, along with the poor health standards that many of these Ex-Servicemen like my Uncle Fred had endured with his family in Belize Town, had forced the hand of the colonial government in the former British Honduras to repatriate these men’s Scottish wives and the children they bore by them. The twin tale narratives of my two Belizean uncles has unfolded here in a sort of tribute to them in two different lights: in the former British Honduras and in their service in the war in Europe. It is also paying homage to those Belizean men who gave up their birthplace and their loved ones in the former British Honduras, now Belize, to serve Queen and country in a colonial servitude that has left behind more tears and sadness than joy. It’s my honor to them, regardless.

(Photo through the courtesy of a Belizean history enthusiast)