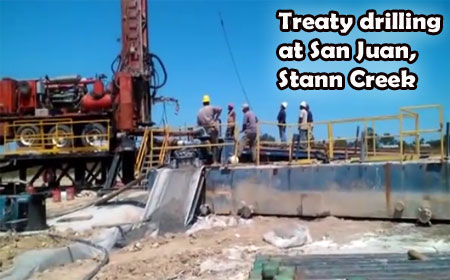 BELIZE CITY–Treaty Energy Corporation, the joint venture partner of Princess Petroleum Limited, the local company which has a contract with the Government of Belize to explore for oil both onshore and offshore Belize, issued a letter this week to shareholders, announcing that they have launched an investigation after company officials ceased Belize operations and tied up company assets in a loan with a real estate firm.

As we understand it, Princess has severed its relationship with Treaty Energy Corporation – which is a US company that admitted to shareholders that its Belize operations had gone awry, and that had acquired a bit of notoriety after making false declarations that the company had struck oil in Stann Creek, Belize, when in fact, no commercial find had been discovered.

Earlier this week, the company issued a letter of progress to shareholders, providing reports on its Belize and Colorado operations.

Dr. Colin Young, Chief Executive Officer in the Ministry of Energy, Science and Technology and Public Utilities, told Amandala today that, “As far as we understand, the Princess group is no longer in operation with them, although [Princess] still [has] a valid concession, including the offshore bit as well.”

According to Young, Princess has relinquished substantial offshore acreages, including portions of the concession that were around the Great Blue Hole and the Turneffe Atolls.

He said that the Government had no formal relationship with Treaty Energy, but they were brought in by Princess Petroleum and were subcontracted to explore for oil in Stann Creek.

The company had reported back in 2012 that it had commenced drilling its first well, the San Juan #2, in the Stann Creek district. That same year, the company made a bogus claim that it had struck oil at a location which it said appeared to have 6 million barrels of oil.

“It was something that the ministry took very seriously. It was at the time inconsistent with standard operating procedure,” said Young, confirming that Treaty had certainly not struck oil.

The company told its shareholders that it had “failed to execute on many fronts,” and that it has launched a formal investigation.

“In January 2014, Treaty management performed, without reporting to shareholders, the abandonment of Belize and its opportunity platform when it assigned all of its assets to the Hackmeyer Real Estate Group in a ‘blanket security agreement’ as collateral against funds which the Hackmeyer Group had loaned to Treaty for ironically, development in Belize, as well as some of the company’s endeavors in Texas,” the company said.

“We believe this was misguided. Clearly at that time, Treaty was not able to execute on extensive opportunities available to the company to provide shareholders the ultimate return on investment that was and is indeed possible,” the letter added.

It also expressed concerns about leakage of “insider information.”

“They contained false information about former consultants being involved in activities on said trip. Misleading statements regarding Treaty’s ownership and title to said interests and deliberate misinformation about contractual discussions and outcomes of said discussions,” it claimed.

Treaty said that after the company’s assets have been sold by the Hackmeyer Group and the lien has been removed, proceeds are to flow into escrow and then be distributed satisfactorily to all parties in Belize and will also be used to finance its Colorado operations.

The company said that with the sale of its assets, it has been able to settle some of its major debts, which should in turn help it to find financing for its Colorado operations.