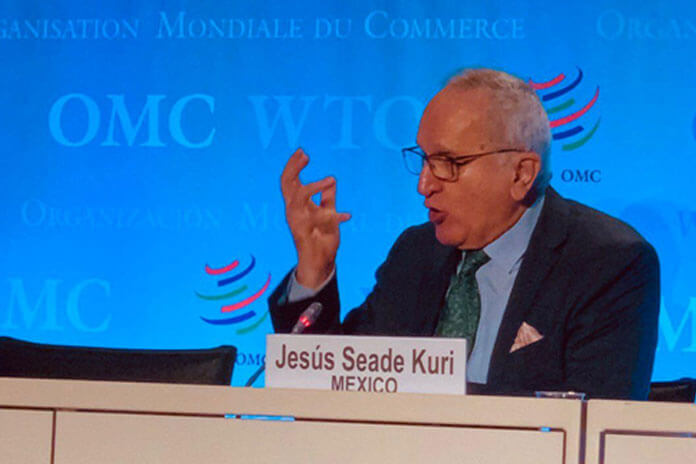 • He highlighted his career in the WTO as negotiator for Mexico and as Founder Deputy Director-General, as well as Chief Negotiator of the USCMA; a unique combination of relevance and experience among the candidates.

• He emphasized his experience and reputable dialogue with key players in China, the European Union and other regions of the world, as well as his knowledge of the dynamics needed to boost trade in developing countries.

MEXICO, Wed. July 22, 2020 (Press Release 169)– With a commitment to bringing the institution back to the center of international governance and to promote global economic recovery through it, Mexico’s Dr Jesús Seade Kuri presented today in Geneva his candidacy to Director-General of the World Trade Organization (WTO) before its General Council.

“Extraordinary efforts with all members are urgently needed to repair and maintain the relevance of the WTO as the core of a robust and inclusive system that meets the demands of our people, businesses, consumers and their development needs,” Seade told the Council.

Dr Seade Kuri —who has a decades-long career as a chief trade negotiator at the multilateral and bilateral levels— outlined for more than an hour and a half his vision of how the WTO can and should return to its vital role in promoting trade and economic development.

In his presentation, Seade recalled his participation as the Mexican negotiator in the Uruguay Round that led to the creation of the WTO, of which he served as Deputy Director-General. He emphasized his experience in senior positions of two international economic agencies critical to global governance: The International Monetary Fund and the World Bank.

Seade Kuri recognized the WTO’s contributions to the liberalization of fairer and inclusive trade by establishing common rules. However, he pointed out that the organization’s performance has fallen short of the expectations generated when created. Among other reasons, this has been because of its limited negotiating outcomes and the impasse in the appellate body preventing the resolution of disputes between member states.

This paralysis is compounded by the negative effects that the COVID-19 pandemic has had on global value chains and international trade —which, according to WTO, may fall to a third during 2020. Given this outlook, Seade Kuri noted that today the WTO requires profound change. This involves unlocking negotiations, both on the current issues and in an agenda for the twentieth century; one that includes digital trade and the sustainability of global exchange of goods and services.

“It has been said that the WTO is like a bicycle that has fallen on its side due to lack of momentum, and by falling, it has broken. It needs to be thoroughly repaired. This requires a director who —as a chief negotiator— was present in the design of the device” he said.
Seade spoke out about recovering the strength and certainty of the dispute settlement mechanism to make the WTO more effective, transparent and inclusive. He also noted that it is imperative that negotiations contribute to inclusion, diversity and plurality within the WTO.

Dr Seade Kuri presented his credentials for the post, including being Mexico’s Ambassador to the GATT and Chief Negotiator for the Uruguay Round; GATT Deputy Director-General and Founding Deputy Director-General of the WTO. Also, Senior Advisor to the IMF and the World Bank, as well as Chief Negotiator of the Mexico-United States-Canada Agreement (USCMA).

Currently, as Deputy Minister for North America at the Mexican Ministry of Foreign Affairs, Seade oversees political and economic relations with the United States and Canada. He has been an academic in the United Kingdom, Mexico and China for about a decade. His career has allowed him to establish close relationships with heads of state, ministers, legislators and academia.

“My solemn commitment to you is to be an effective interlocutor, close to all members to the north and south, east and west, and to be fully equidistant from all”, he said to the WTO General Council.

Dr Seade’s candidacy for the WTO is promoted and supported by the Government of Mexico, a country with a broad multilateralist tradition, a trade-oriented economy and a well-known vocation in favor of free and fair international trade.