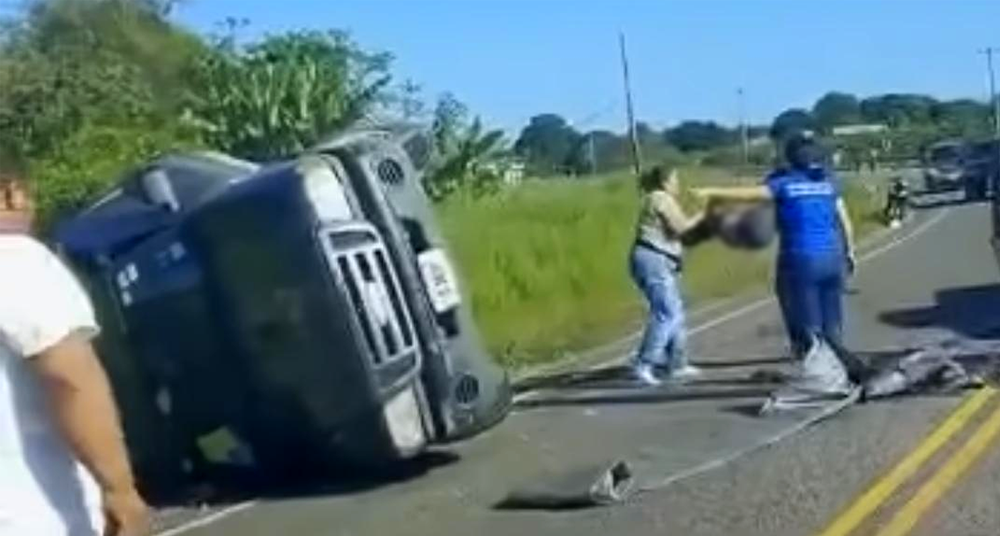 Photo: Pick up truck that overturned

Two separate road traffic accidents each claimed a life over the weekend. In one of the incidents, Agusto Acosta lost his life while riding his bicycle near Libertad on the Philip Goldson Highway, while in another incident, Noe Constante, who was a passenger in a pickup, was flung to his death when the truck in which he was traveling collided with an SUV on the Southern Highway.

The first incident occurred on Friday, January 20, at around 6:20 a.m. Agusto Acosta, 80, a laborer of Concepcion Village, Corozal District, was riding his beach cruiser bicycle between Miles 76 and 77 on the Philip Goldson Highway in the direction of the Libertad Junction, when he was clipped from behind by a motorcycle which was being driven at the time by 32-year-old Misael Montejo, a maintenance worker of San Narciso Village.

Both individuals were flung off their respective bikes and landed on the side of the highway. The two injured men were transported to the Corozal Community Hospital for medical treatment. Acosta, whose injuries were more severe, passed away while undergoing treatment. Montejo, on the other hand, was transported to Belize Medical Associates in Belize City for further treatment, and while there were some reports that Montejo may have also passed, it was reported this evening thatt he has been released from the hospital and is cooperating with Corozal police.

The other incident occurred on the Southern Highway, when Noe Constante, was flung out of a pickup truck in which he was traveling and died on impact.

According to police reports, Constante was inside a Nissan Frontier pickup truck being driven by Nung Fi Lee, when it collided with a Nissan Rogue SUV, causing Constante to be flung out of the truck near Mile 26. Police have since detained the driver of the pickup in which Constante was traveling along with the driver of the SUV, Julio Monterroza, who was charged with manslaughter by negligence, causing death by careless conduct, and failure to provide a specimen to the police. He was additionally charged with driving a motor vehicle without due care and attention.