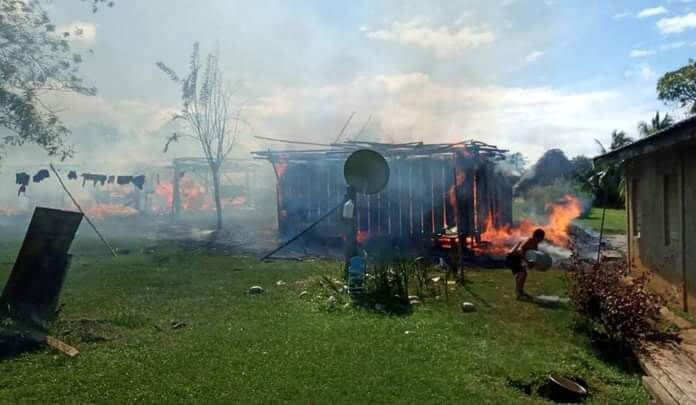 OTOXHA, Toledo District, Mon. Nov. 2, 2020– Two houses in Otoxha Village, Toledo District, were destroyed by a fire that flared up when an LPG salesman used an open flame to ascertain if a recently filled gas tank was leaking.

On Saturday, October 31, Elizabeth Ack ordered $50 dollars worth of butane gas from Lucas and Sons Butane Gas Company, which was delivered by Marvin Sam, 19, an employee of the company, in a 50-pound cylinder gas tank.

Reports given to police indicated that after reconnecting the valve to the tank, Sam used a flame from a lighter to check for leaks, and as a result, ignited a leak which then caused a fire that spread to portions of the house.

Sam ran for a fire extinguisher from his truck, but by the time he returned, the thatched roof of Elizabeth’s dwelling, which had wooden siding and measured 18 foot by 36 feet, was already a raging inferno.

That fire spread to and destroyed an adjacent structure, which measured 16 feet by 30 feet, and also had wooden siding and a thatched roof.

Nothing in Ack’s home or the other structure was saved, and the damage is estimated at around $14,000.   Both structures were owned by Elizabeth’s father, Tomas Ack, 65.