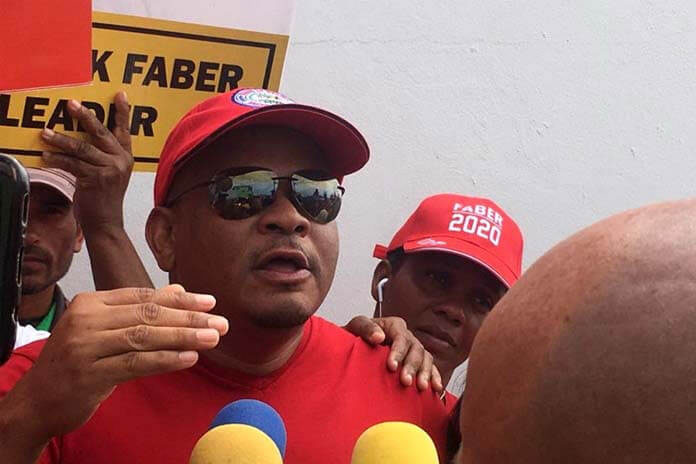 Chairman Michael Peyrefitte said that the party will have a convention if more than one name is submitted for leader.

From all accounts, the NPC meeting lasted only a few minutes before it was decided that April 5 will be the date for the party’s next national convention.

Following the NPC meeting, the UDP candidates remained in a lengthy discussion about the state of their party. No one, however, would shed any light for the media on what was discussed at the meeting, which continued until the early afternoon, before hostilities broke out and the meeting ended.

UDP chairman Michael Peyrefitte explained to reporters,”The constitution of the party says that once we declare that we are in an emergency situation today, then within 35 days, at least 35 days must pass, to have a convention. That puts us at April 5. So the persons who are interested from the National Assembly to put in their names for the leader, they have up to March 26 to do so.”

Peyrefitte said that “[if only one name is submitted], then we have a consensus; if two persons put in their names, then we go to a contested convention.”

Hon. Patrick Faber (Collet) emerged from the meeting, followed by a group of his supporters. Faber told reporters that the National Party Council is not a decision-making body, but that it is the national convention that is the medium for decision-making when it comes to electing a party leader.

Faber said that people are telling him on his phone and via his Facebook Messenger that he is the right person to lead the party.

Faber added, “I am heartened by what transpired in there, a lot of progress has been made, not to say that things didn’t break down, but I am heartened for the life of this party.”

Dr. Omar Figueroa (Cayo North), who was recently said to have received the nod from Cabinet for the post of UDP party leader, did not respond when he was asked whether he will be offering himself as a candidate for the position. Hon. Faber was not at that Cabinet meeting at which Figueroa was said to have gotten the nod from his Cabinet colleagues.
On Sunday, February 9, the UDP held a contested national convention at which Hon. John Saldivar (Belmopan area representative) was elected as its new leader, but Saldivar resigned less than 72 hours after he was sworn in.

Saldivar’s resignation was triggered after evidence was led in the money laundering and fraud trial of Lev Dermen in Salt Lake City, Utah. During that trial, text messages emerged which revealed that Saldivar had traveled to Miami to collect US$50,000 as part of an arrangement made by Cob Kingston and Lev Dermen.