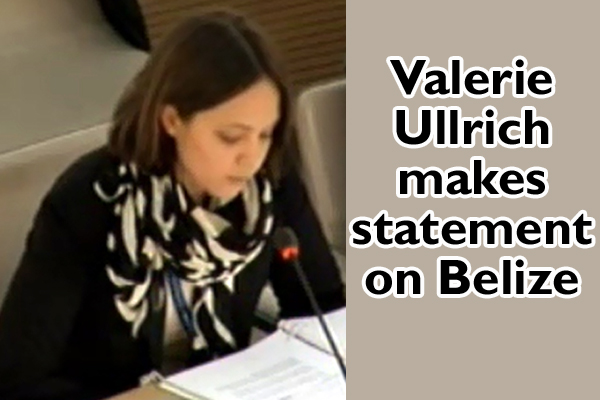 Two very influential nations—the United Kingdom and the United States—turned up the heat on Belize this week over existing laws that criminalize same-sex relations at the 17th Session of the Human Rights Council Working Group’s Universal Periodic Review (UPR), held in Geneva, Switzerland, under the umbrella of the United Nations’ Office of the High Commission for Human Rights.

Whereas there has been robust opposition from Belize’s religious community—strongly opposed to the revision of Section 53 of Belize’s Criminal Code, which attaches a 10-year sentence for persons convicted of intercourse against the order of nature, including sodomy and bestiality—the UK and the US, two of Belize’s chief trading partners, capitalized on the occasion of this week’s human rights forum to jab at Belize to do away with those laws.

Most notable, though, was the statement made by the representative of the United Kingdom, which went further to call on Belize to formally abolish the death penalty.

According to the United Nations, the UPR is a review which engages 193 UN member states. Malaysia has, likewise, faced similar criticism, as news reports indicate Canada’s stance that Malaysia should respect LBGT rights and not discriminate against such groups. Malaysia’s peers also took issue with the country’s capital punishment laws for drug and firearm offences, treason and murder.

At the UPR, Belize is represented by a three-member delegation headed by Judith Alpuche, Chief Executive Officer in the Ministry of Human Development and Social Transformation, who said that Belize was reporting on the status of the implementation of its international human rights obligations.

Alpuche, who spoke on Monday, October 28, said that Belize’s national report—which features progress and challenges Belize has made on the human rights front—was “subject to spirited debate,” with input from various civil society groups such as the Women Issues Network, the Human Rights Commission of Belize, the Belize Council of Churches and the United Belize Advocacy Movement (UNIBAM), the group challenging the Government in court over the criminalization of sodomy.

Alpuche told the UPR delegates that Belize’s Cabinet gave its “unqualified endorsement” of the Belize report. She also said that respect for human rights is a cornerstone of Belize’s democracy and the Government of Belize has taken a “rights-based approach to development.”

Ruth Turner, the Human Rights Attaché at the UK’s Mission to the UN in Geneva, delivered a statement in response to Belize, on behalf of the United Kingdom of Great Britain and Northern Ireland.

Turner said that the UK is a strong supporter of equality and the enjoyment of human rights, and the inadmissibility of discrimination on the grounds of sexual orientation.

“We, therefore, welcome comments made by the Prime Minister of Belize on the 21st September which recognize the duty of his Government to ensure that ‘all citizens without exception enjoy the full protection of the law;’ and his reference to the Constitution which declares that, ‘all persons are equal before the law and entitled to non-discrimination and freedom from unlawful attacks on their honor and reputation,’” she added.

She noted that while Belize has not carried out the death penalty since June 1985, in 2012, Belize was unable to join 111 other states in supporting a worldwide moratorium on execution as a step towards total abolition—a decision in which she said the UK was “disappointed.”

At the UPR session, Turner furthermore laid out two recommendations which the UK has for Belize: “First, that Belize takes steps to remove domestic legislation that outlaw same-sex activity between consenting adults, and develop policies to address discrimination against LGBT people. Second, that Belize undertakes a public consultation on the complete abolition of the death penalty.”

The UK recommendations were followed by those of the United States of America. Valerie Ullrich, representative of the US Mission in Geneva, said Belize should “Reform existing laws that can be used to discriminate against lesbian, gay, bisexual, and transgender persons, including the provision of ‘unnatural crime’ laws prohibiting ‘carnal intercourse against the order of nature.’”

It also called on Belize to provide state authorities, including law enforcement and judicial officials, with human rights training for the protection of women and members of minority groups, such as lesbian, gay, bisexual, and transgender persons.

Thirdly, it said Belize should “Increase the capacity of the Ombudsman’s Office, the Belize Police Department’s Professional Standards Board, and other human rights-related institutions through internal efforts and by seeking assistance in these areas from international development partners.”

Ullrich also lauded Belize’s adoption of the highly controversial Gender Policy 2013—which some Belizeans say makes it clear that there is an effort to move toward the adoption of the LGBT agenda in Belize.

“We commend the progress Belize has made in addressing discrimination against women, and particularly the Cabinet’s approval of the Revised National Gender Policy. We encourage the Government of Belize to reform existing laws which can be used to discriminate against lesbian, gay, bisexual, and transgender persons,” Ullrich said.

Markedly, the report submitted by Belize—a report compiled by the Belize Ministry of Foreign Affairs in conjunction with the Ministry of Human Development and Social Transformation—points to efforts Belize has made in promoting and protecting human rights.

The report, submitted back in July, said that these efforts “…have been bolstered by the advocacy work done by members of civil society.”

According to the Belize report, money is the greatest challenge in implementing sector plans that seek to advance human rights.

“Notwithstanding such limitations, human rights in Belize are being advanced in many respects, as demonstrated by the response of very active advocacy of various interest groups. For example, the United Belize Advocacy Movement (UNIBAM) formed in 2006, represents lesbian, gay, bisexual and transgender persons (LGBT) and is challenging the constitutionality of the ‘unnatural crime’ provision in Belize’s Criminal Code,” the Belize Government report said.

The report added that the Council of Churches and the Belize Association of Evangelical Churches are interest groups opposed to the removal of the “unnatural crime” provision.

Of note is that UNIBAM’s “stakeholder submission” to the United Nations UPR points to the constitutional challenge against section 53 of Belize’s Criminal Code, saying that, “In [the] previous review, Belize has received recommendations to take appropriate legislative measures in order to ensure that no person can be subject to criminal sanctions for same-sex activity between consenting adults.”

This is Belize’s second such review by the UPR, the first having been undertaken in 2009.

Among the other issues addressed by Belize include gender-based violence and indigenous rights.